A feature called Channel Bar was integrated with Internet Explorer 4 as part of the Windows Desktop Update, and was later included with the Windows 98 operating system. The Channel Bar was designed to be an information delivery system based on Microsoft's Channel Definition Format (CDF).[2] Users could subscribe to various channels—websites designed to deliver content—and receive updates from the channel provider.[3] Due to its integration with Active Desktop, information could also be displayed within Windows Explorer or in the Channel Screensaver.[4]

In the early 2000s, Microsoft Research developed an application called Sideshow to display dynamically updated information, such as news updates and weather forecasts, in a visually unobtrusive fashion on a user's desktop.[5] Sideshow would later be demonstrated during Microsoft's Professional Developers Conference of 2001.[6]

Windows Sideshow is compatible with Windows 2000, Windows ME, and Windows XP, and can be made to run on older versions of the Windows operating system. If one attempts to change the application's appearance in versions of Windows later than Windows XP, a bug causes its appearance to become completely black. 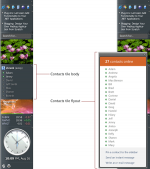 The Rules and Alerts window in Windows "Longhorn" 4074.

Notably, Microsoft had envisioned the Windows Sidebar as a replacement for the notification system seen in previous versions of Windows.[9]

During development of Windows 7 the user interface for Windows Sidebar was removed, which made the desktop the sole location for Gadgets.[11] Various improvements were made to Gadgets in Windows 7.[12]

In early builds of Windows 7, Gadgets could not be aligned properly. In build 6956, the Gadgets applet cannot be accessed if UAC is off.

Windows 8 included support for Windows Gadgets up to the Release Preview; support was discontinued in the RTM version of the operating system. According to Microsoft, this decision was made in response to potential security vulnerabilities discovered during development of Windows 8 which could allow arbitrary code to be executed while running compromised Gadgets.[13][14] Microsoft subsequently released a tool which would allow users to disable the feature in Windows Vista and Windows 7.[15]