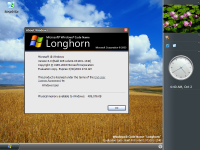 The Slate theme as it appears in Windows "Longhorn" build 4051.

Slate is a visual style present in Milestone 7 builds of the Microsoft Windows "Longhorn" operating system. It is characterized by its dark gray appearance, bevel effects, and orange progress indicators. Slate may have originated in "Longhorn" build 4042.

The theme is reportedly broken in builds after build 4074, and has an undesired glossy effect on the taskbar and Windows Sidebar in that build.