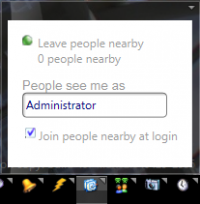 People Near Me (formerly People Nearby) is a peer-to-peer networking component included in the Microsoft Windows Vista operating system that allows users to discover and collaborate with other users connected to the same subnet.

The Contact Picker in Windows "Longhorn" displaying an option to select contacts nearby (People Near Me).

A precursor to People Near Me was included in the Windows "Longhorn" operating system as a feature known as People Nearby. The People Nearby feature was available within a tile on the Windows Sidebar[1] and allowed users to discover and collaborate with other users connected to the same local subnet. People Nearby functionality was demonstrated during the Professional Developers Conference of 2003 by Hillel Cooperman and Craig Beilinson where it was used to start a presentation and share data across PCs.[2]

Discovery and collaboration enabled by People Nearby was a part of Microsoft's mobile platform strategy as revealed during the Windows Hardware Engineering Conference (WinHEC) of 2004.[3][4]

In Windows Vista, the People Near Me Control Panel applet provides various options for how information is presented. Users can customize the name and picture to be displayed during an invitation, specify who they would like to receive invitations from, and when to sign into People Near Me.

Microsoft stated that developers can use the capabilities of Windows Vista and People Near Me to build applications that allow users to broadcast interests, collaborate on documents, message other users, project screens, share objects and applications, subscribe to events, and so on.

Windows Meeting Space (formerly Windows Collaboration[5]) is a peer-to-peer collaboration program in the Windows Vista operating system that allows users to collaborate on documents, share desktops and files, and send individual messages using either text or ink with other users who are connected to the same subnet; a total of 10 users can participate in a single session.

Retrieved from ‘https://www.betaarchive.com/wiki/index.php?title=People_Near_Me&oldid=21276’
Categories:
This page was last modified on 5 May 2019, at 13:35.
Privacy policy
About BetaArchive Wiki
Disclaimers