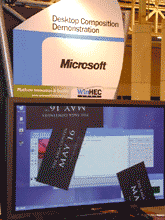 A demonstration of the Desktop Composition Engine shown during the Windows Hardware Engineering Conference of 2003.

One of the most well known visual effects of the DCE is present in certain 4015 and 4018 builds (Lab06). In every build that has it, it makes even the menus transparent, and even the screensaver.

After development reset it had been renamed to its well-known name Desktop Window Manager. However, starting with Longhorn M7 development, many DCE references, such as DceStartup, were being changed to reference DWM.

Retrieved from ‘https://www.betaarchive.com/wiki/index.php?title=Desktop_Composition_Engine&oldid=449594’
Categories:
This page was last modified on 9 April 2021, at 19:35.
This page has been accessed 133 times.
Content is available under the Creative Commons 3.0 ShareAlike (except the Microsoft KB Archive). unless otherwise noted.
Privacy policy
About BetaArchive Wiki
Disclaimers