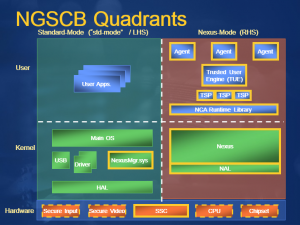 Diagram of the NGSCB software architecture as presented during WinHEC 2003.

The Next-Generation Secure Computing Base (codenamed Palladium)[1] is a software architecture originally slated to be included in the Microsoft Windows "Longhorn" operating system. Development of the architecture began in 1997.[2][3]

The NGSCB was the result of years of research within Microsoft to create a secure computing solution that equaled the security of more closed systems while preserving the openness and flexibility of the Windows platform.[4] The NGSCB relied on new software components and specially designed hardware to create a new execution environment where more sensitive operations could be performed securely.[5] Microsoft's primary stated objective with the NGSCB was to "protect software from software."[4][6]

The idea of creating an architecture where software components can be loaded in a known and protected state predates the development of NGSCB.[7] A number of attempts were made in the 1960s and 1970s to produce secure computing systems,[8][9] with variations of the idea emerging in more recent decades.[10][11]

In 1999 the Trusted Computing Platform Alliance, a consortium of various technology companies, was formed in an effort to promote trust in the PC platform.[12] The TCPA would release several detailed specifications for a trusted computing platform with focus on features such as code validation and encryption based on integrity measurements, hardware based key storage, and attestation to remote entities. These features required a new hardware component designed by the TCPA called the Trusted Platform Module (referred to as a Security Support Component,[13] Secure Cryptographic Processor,[4] or Security Support Processor[4] in earlier Microsoft documentation). While most of these features would later serve as the foundation for Microsoft's NGSCB architecture, they were different in terms of implementation.[2] The TCPA was superseded by the Trusted Computing Group in 2003.[14]

Development of the NGSCB began in 1997 after Microsoft developer Peter Biddle conceived of new ways to protect content on personal computers.[5]

Microsoft later filed a number of patents related to elements of the NGSCB design.[15] Patents for a digital rights management operating system,[7] loading and identifying a digital rights management operating system,[16] key-based secure storage,[17] and certificate based access control[18] were filed on January 8, 1999. A method to authenticate an operating system based on its central processing unit was filed on March 10, 1999.[19] Patents related to the secure execution of code[20] and protection of code in memory[21] were filed on April 6, 1999.

During its Windows Hardware Engineering Conference of 2000, Microsoft had shown a presentation titled Privacy, Security, and Content in Windows Platforms which focused on the protection of end user privacy and intellectual property.[22] The presentation mentioned turning Windows into a "platform of trust" designed to protect the privacy of individual users. Microsoft would show a similar presentation during WinHEC 2001.[23]

The NGSCB was publicly unveiled under the name "Palladium" on June 24, 2002 in an article by Steven Levy of Newsweek that focused on its origin, design and features.[24][25][26] Levy stated that the technology would allow users to identify and authenticate themselves, encrypt data to protect it from unauthorized access, and allow users to enforce policies related to the use of their information. As examples of policies that could be enforced, Levy stated that users could send e-mail messages accessible only by the intended recipient, or create Microsoft Word documents that could only be read a week after they were created. To provide this functionality, the technology would require specially designed hardware components, including updated processors, chipsets, peripherals, and a Trusted Platform Module. In August 2002, Microsoft posted a recruitment advertisement seeking a group program manager to provide vision and industry leadership in the development of several Microsoft technologies, including its NGSCB architecture.[27]

In 2003, Microsoft publicly demonstrated the NGSCB for the first time at its Windows Hardware Engineering Conference[28][29][30] and released a developer preview of the technology later that year during its Professional Developers Conference.[31][32][33] 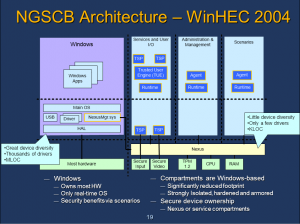 In 2005, Microsoft's lack of continual updates on its progress with the technology had led some in the industry to speculate that it had been cancelled.[41] At the annual Microsoft Management Summit event, then Microsoft CEO Steve Ballmer said that the company was building on the foundation it had started with the NGSCB to create a new set of hypervisor technologies for its Windows operating system.[42] During WinHEC 2005, Microsoft announced that it had scaled back its plans for the technology in order to ship the post-reset Windows "Longhorn" operating system within a reasonable timeframe. Instead of providing an isolated software environment, the NGSCB would offer full operating system volume encryption with a feature known as Secure Startup (which would later be renamed as Bitlocker Drive Encryption).[43] Microsoft stated that it planned to deliver other aspects of its NGSCB architecture at a later date.[44]

In July 2008, Peter Biddle stated that negative perception was the main contributing factor responsible for the cancellation of the architecture.[45]

In Greek and Roman mythology, the term "palladium" refers to an object that the safety of a city or nation was believed to be dependent upon.[46]

On January 24, 2003, Microsoft announced that "Palladium" had been renamed as the "Next-Generation Secure Computing Base." According to NGSCB product manager Mario Juarez, the new name was chosen not only to reflect Microsoft's commitment to the technology in the upcoming decade, but also to avoid any legal conflict with an unnamed company that had already acquired the rights to the Palladium name. Juarez acknowledged that the previous name had been a source of criticism, but denied that the decision was made by Microsoft in an attempt to deflect criticism.[1] 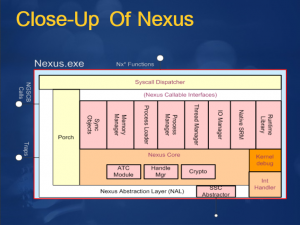 Diagram of the Nexus design.

The Nexus, previously referred to as the "Nub"[2] or "Trusted Operating Root"[47][48] is the new kernel introduced by the NGSCB. The Nexus is responsible for the secure interaction between the specialized hardware components, and is also responsible for the isolation and management of Nexus Computing Agents.

Sealed storage refers to the use of encryption to protect locally stored data. Sealed storage differs from traditional encryption schemes in that it allows data to be decrypted only under conditions specified at the time of its encryption.

Encrypted memory was once considered for the NGSCB, but the idea was later discarded as the only threat conceived of that would warrant its inclusion was the circumvention of digital rights management technology.[50][51]

The Trusted Platform Module is the hardware component that securely stores the cryptographic keys for the Nexus and Nexus Computing Agents, which makes the sealed storage and attestation features of the Nexus possible.

The Trusted Platform Module includes an asymmetric 2048-bit RSA key pair, referred to as the Endorsement Key (EK), which is unique to each particular module and is generated as part of its manufacturing process. The public key is accessible to applications or services that have established a trusted relationship with the owner, and is also used to provide the owner with Attestation Identity Keys (AIKs).

According to Microsoft, version 1.2 of the Trusted Platform Module is the first version compatible with its NGSCB architecture. Previous versions do not include the required functionality.[52]

In builds of Windows "Longhorn"

A successful attempt to configure the Next-Generation Secure Computing Base in Windows "Longhorn" build 4053.

The development of the Next-Generation Secure Computing Base ultimately led to the creation of Microsoft's Bitlocker drive encryption feature, which was one of the first mainstream device encryption features to support version 1.2 of the Trusted Platform Module, and the first device encryption feature to be integrated with the Windows operating system.[54] Certain design elements of the NGSCB would become part of Microsoft's virtualization technologies.[42][55] Microsoft's Windows 8 operating system, released in 2012, includes a feature called Measured Boot which allows a trusted server to verify the integrity of the Windows startup process.[56][57][58] Although it is not directly related to the NGSCB architecture, it serves a purpose comparable to the architecture's attestation feature in that they are both designed to validate a platform's configuration.[59]

In addition, features based on those originally intended for the NGSCB would later become available in alternative operating systems. In 2012, Giesecke & Devrient produced a parallel execution environment called MobiCore for the Android operating system designed to host secure user applications and protect confidential data.[60] In 2013, Apple released a new feature for its iOS operating system called Secure Enclave to protect a user's biometric information.[61]

Retrieved from ‘https://www.betaarchive.com/wiki/index.php?title=Next-Generation_Secure_Computing_Base&oldid=447674’
Categories:
This page was last modified on 8 January 2021, at 12:35.
Privacy policy
About BetaArchive Wiki
Disclaimers