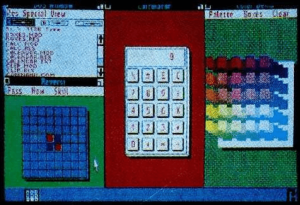 Demonstration on the Tandy 2000 personal computer

This is a pre-release build of Microsoft Windows 1.0. It was compiled somewhere between June 1984 and August 1984 and was demonstrated on the Tandy 2000 personal computer.

The CALENDAR.MOD, CALENDAR.RES and CALENDAR.TXT files suggest that the stub Calendar app (later included in Beta Release) was already under development, however, everything appears to be stored in a plain text file. Just like the previous builds, this build predates NE and uses the .MOD extension for application files, which suggests that this build is most likely Development Release #3.

This build is also the last known pre-Beta Release build to have red Calculator background.

Retrieved from ‘https://www.betaarchive.com/wiki/index.php?title=Windows_1.0/Late_Tandy_2000_build&oldid=452337’
This page was last modified on 30 July 2021, at 08:58.
This page has been accessed 120 times.
Content is available under the Creative Commons 3.0 ShareAlike (except the Microsoft KB Archive). unless otherwise noted.
Privacy policy
About BetaArchive Wiki
Disclaimers