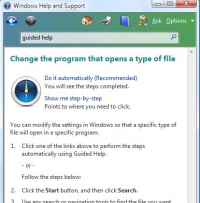 Guided Help as seen in the Help and Support Center of a pre-release build of Windows Vista.

Guided Help (codenamed Active Content Wizard) is a feature available in pre-release builds of Windows "Longhorn" and Windows Vista designed to assist an inexperienced user during a new task by presenting a series of progressive steps for the user to follow, or by performing the task for the user with little to no interaction.[1][2]

In pre-reset builds of Windows "Longhorn" a new feature called the Active Content Wizard was designed to assist users during a task by displaying a series of progressive steps for the user to follow, or by performing the task for the user while requiring little or no interaction.

Guided Help is accessible within the Help and Support Center in pre-release builds of Windows Vista;[1][2] the first known build in which it appears is Build 5112. It presents two options relevant to the help articles in which it appeared: "do it automatically", which automated most of a task for a user; and "show me step-by-step" to prevent a series of steps for a user to perform to accomplish the task. When Guided Help begins, the user's desktop and windows—excluding the Guided Help window and task area—are dimmed to increase discoverability of relevant commands, and a green cursor navigates to the related tasks areas to bring the user's attention into focus.[3] Guided Help is characterized by a compass with an animated arrow that changes its direction based on where the next step of the task is to be performed (e.g., if a window on the left side of a user's screen included an option that was part of an ongoing task, the arrow would point toward the location of the option in that window). Additionally, if a user decided to perform a task through a series of progressive steps, the Guided Help window would automatically reposition itself toward the area where the next step was located.[2]

The Guided Help error as seen in Windows Vista RTM.

Prior to the release to manufacturing of Windows Vista, Microsoft announced that it would not ship Guided Help with the operating system. Instead, the Online Help functionality of the Help and Support Center would present users with dynamic information.[4]

The executable for Guided Help (ACW.exe) is notably available in the RTM release of Windows Vista, but it yields an error when a user attempts to start the feature.

With the release of the Spring Creators Update for Windows 10, Microsoft released a separate application for Cortana ("Show Me") that offers nearly identical functionality that Guided Help was intended to provide. The release of the application is over a decade after Guided Help was included—and late removed—from pre-release builds of Windows Vista.[6]

Retrieved from ‘https://www.betaarchive.com/wiki/index.php?title=Guided_Help&oldid=448791’
This page was last modified on 17 March 2021, at 04:20.
Privacy policy
About BetaArchive Wiki
Disclaimers