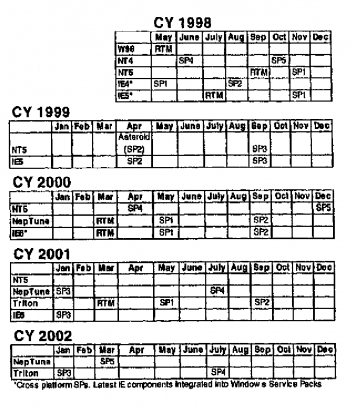 The Service Pack calendar confirming Triton had its own service packs

Microsoft Windows "Triton" is a cancelled version of Microsoft Windows. The confidential documents used against Microsoft in the Comes vs. Microsoft case provide information that Triton was not a service pack for the unreleased Windows Neptune as originally thought, but in fact its successor.

It is unknown whether any builds of Triton were ever compiled, though it was probably canceled during planning stages.

The document overview on page 73 of the confidential documents describes Triton as:

All information written above can be found in this document. Page numbers are defined as the numbers on the bottom right hand corner of the page, NOT as reported by your PDF software.

Retrieved from ‘https://www.betaarchive.com/wiki/index.php?title=Windows_Triton&oldid=449132’
Categories:
This page was last modified on 31 March 2021, at 08:05.
Privacy policy
About BetaArchive Wiki
Disclaimers