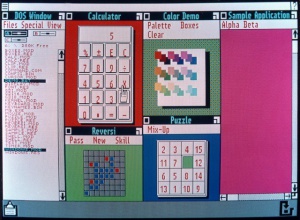 Development Release #1 is an early pre-release build of Microsoft Windows 1.0, demonstrated on the Tandy 2000 personal computer.

The Tandy 2000 was an Intel 80186-based computer. Since the 80186 processor was not fully compatible with the IBM PC and compatibles, this created compatibility issues dividing it from other machines of the time.

The version of Windows demonstrated here is one that was specifically designed for the Tandy 2000 personal computer, including the Intel 80186 processor and also the high resolution graphics (640x400 screen resolution at 16 colors) used by the machine itself.

This build was launched from a file called DEMO.BAT and was intended to be run from a single floppy disk. This loaded a copy of Windows with several sample applications which could easily be loaded from there.

This build also predates NE and uses the .MOD extension as the main executable format.

The files here are as follows:

Retrieved from ‘https://www.betaarchive.com/wiki/index.php?title=Windows_1.0/DR1&oldid=448841’
This page was last modified on 17 March 2021, at 08:54.
Privacy policy
About BetaArchive Wiki
Disclaimers