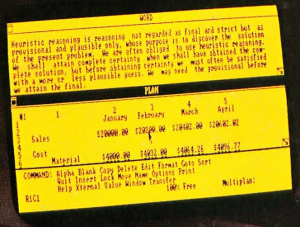 Microsoft Windows in use with two applications side-by-side

This pre-release version of Microsoft Windows was reviewed in the December 1983 BYTE Magazine issue.

The general user interface uses a menu-driven interface, similar to Microsoft Word. In this fashion, the user would select the relevant commands from the bar at the bottom of the screen, known as the "session-control layer".

Launching applications is done by either selecting the "Run" command on screen or typing the "R" key on the keyboard, which will display a list of available programs to choose from.

Support for existing MS-DOS-based applications was done in two ways, depending upon the application being used.

One way is to run it within a windowed state, and allow it to co-exist on screen with other running applications. This is called "co-operative"; that is, the application handles all of its input and output calls through MS-DOS. This was generally the case with text-based applications such as BASIC86, Microsoft Word, and Multiplan.

Another way is to run it in a full-screen state. This is done for "uncooperative" applications that write directly to the hardware instead of interfacing with MS-DOS, particularly for graphical programs.

Although this pre-release version was intended to be used alongside MS-DOS-based applications, one Windows application that shipped with this version was a sample "CHART" application which provided an early look at Windows software and which also demonstrated the use of popup dialogs.

The same application also was among the first to utilize the device-independent graphics system, also known as the GDI (Graphics Device Interface), which works by passing calls down to the graphics driver which in turn displays the graphics on screen.

Retrieved from ‘https://www.betaarchive.com/wiki/index.php?title=Windows_1.0/BYTE&oldid=448834’
This page was last modified on 17 March 2021, at 08:49.
Privacy policy
About BetaArchive Wiki
Disclaimers