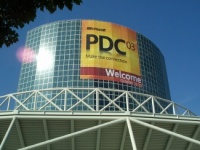 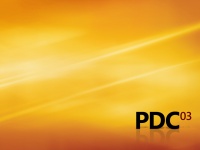 The Professional Developers Conference 2003 (PDC 2003) was an event hosted by Microsoft at the Los Angeles Convention Center on October 26 through October 30 in 2003. PDC 2003 was the stage for SQL Server "Yukon," Visual Studio "Whidbey," and Windows "Longhorn". The event was called the "Longhorn" PDC by Bill Gates during his keynote.[1] According to Microsoft, demand for the event was unprecedented.[2] 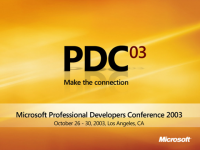 The schedule of the conference can be found on the archived Microsoft PDC 2003 Agenda and Session webpage.[3]

Before Bill Gates went on the stage, a humorous Red vs. Blue Halo video was demonstrated to attendees. The video is still available for download from the Microsoft Download Center.[4]

Gates discussed key catalysts in software development, pointing to a variety of trends driving the next wave, including Web services interoperability, proliferation of smart clients and software and hardware innovation. He highlighted key characteristics of the next wave: developers building connected systems using Web services that reflect the dynamic nature of the real world; software making oceans of digital information more meaningful and actionable; and new breakthrough user experiences, improving interactions between people, groups and organizations.

"It's an exciting time to be a software developer," Gates said. "Continuing hardware advances, powerful tools and the potential of anything on the Internet to become a building block all make it a great time to do pioneering work. Microsoft is investing heavily to make Windows the optimal platform for developers who want to build on this next wave of innovation."

Get Users to Fall in Love With Your Software

Main article: Get Users to Fall in Love With Your Software

Retrieved from ‘https://www.betaarchive.com/wiki/index.php?title=PDC_2003&oldid=23618’
Category:
This page was last modified on 26 July 2019, at 12:00.
Privacy policy
About BetaArchive Wiki
Disclaimers