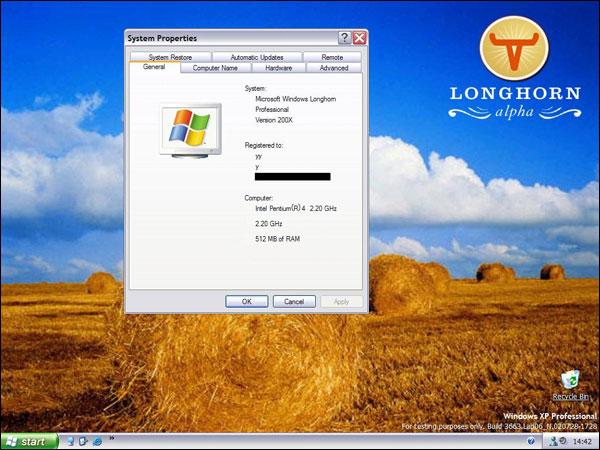 The System Properties of Longhorn 3663 show that "Microsoft Windows XP" has been changed to "Microsoft Windows Longhorn", and the version date has been changed to 200X instead of a year such as 2003 or 2004. The screenshot shows that the specs used to run this build are a Pentium 4 @ 2.20 Ghz and 512MB of RAM, which is regular for higher-end PCs of 2002 and consistent with the timeframe of the screenshots Source.

Click on a date/time to view the file as it appeared at that time.

You cannot overwrite this file.

The following page links to this file:

Retrieved from ‘https://www.betaarchive.com/wiki/index.php?title=File:Longhorn_3663_xBetas_(2).jpg&oldid=451230’
Category:
This page was last modified on 2 May 2021, at 13:42.
Content is available under the Creative Commons 3.0 ShareAlike (except the Microsoft KB Archive). unless otherwise noted.
Privacy policy
About BetaArchive Wiki
Disclaimers