The "Athens" PC was a prototype personal computer developed between 2002 and 2004 by Hewlett-Packard in collaboration with the Microsoft Corporation for the Microsoft Windows "Longhorn" operating system. 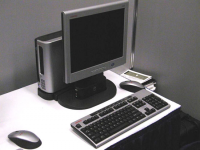 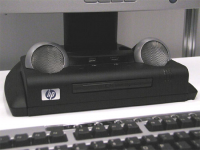 A close-up image of the "Agora" PC display monitor showing its hardware components, including USB ports, speakers, and an optical disc drive.

Development of the "Athens" PC began as a collaborative effort between Hewlett-Packard and Microsoft known as the "Agora" PC. "Agora" was designed to be a real time communications device for business and was demonstrated by HP at the COMDEX computer exposition in 2002 as an extension of the company's e-PC series of small form factor computers.[1] "Agora" included a flat-panel LCD display monitor which housed expansion ports, speakers, and an optical disc drive at the base of the unit, wireless peripheral devices powered by Bluetooth technology, and integrated telecommunication hardware. To demonstrate the capabilities of the machine, a video was displayed during COMDEX which showed a user of "Agora" using Windows Messenger to conduct a video conference with a prototype device which used several cameras to display a 360-degree panorama; the video also showed the user collaborating on documents with other "Agora" users in real time.[1] While previous PCs had already included much of the functionality of "Agora" through the use of supplementary hardware and software, "Agora" was designed to bring all of the functionality together without requiring additional products or services.

In 2003, "Agora" was succeeded by a new prototype PC called the "Athens." This new PC was based on the previous prototype's design and included several new hardware features, such as LED lights on the top of the display monitor to alert the user of events, including a new voicemail, e-mail, or an upcoming appointment. Microsoft publicly demonstrated "Athens" for the first time during its Windows Hardware Engineering Conference of 2003 (WinHEC 2003).[2][3][4] After WinHEC 2003, there were claims that the company was deliberately imitating its competitor Apple in the areas of hardware design and software features.[5] Speaking of the then-new desktop compositor in Microsoft's Windows "Longhorn," Phillip Schiller, then vice president of Apple marketing, stated that the technology was "almost a direct copy of Quartz," referring to Apple's own composition technology.[6]

The "Athens" PC would later be featured at the Professional Developers Conference of 2003 during Hillel Cooperman's presentation titled Get Users to Fall in Love With Your Software.[7]

New PC designs based on "Athens" were unveiled during WinHEC 2004.[8] "Hermes", a new mobile PC prototype, featured a wireless display unit designed for activities such as presentations, and also featured integrated web camera. "Troy", a new business PC prototype, included an integrated dock for a personal digital assistant (PDA) which allowed it to be used as a secondary display. "Troy" also made changes based on feedback received after the "Athens" was unveiled, such as relocating various hardware controls previously featured on the "Athens" keyboard into the base of the main display monitor. According to HP's Brian Schmitz, the "Troy" PC would be the last major PC prototype unveiled before the company would release a shipping product.[9]

In 2005, Microsoft stated that it had made progress towards its "Athens" vision with the new features included in its Windows Vista (then codenamed "Longhorn") operating system, with features such as support for microphone array processing technology, new audio features and glitch-free playback powered by a new audio subsystem, and improvements to the native Windows Bluetooth subsystem; the company also stated that many aspects of its "Athens" vision were realized in the new features included with its Office Communicator 2005 and Office Live Communications Server 2005 products.[10] Elements of the "Athens" PC would later reemerge in prototype personal computers developed by the Carbon Design Group for Microsoft's Windows Vista operating system.[11][12]

Although the "Athens" and subsequent PC prototypes were not released, Microsoft employee M3 Sweatt wrote in 2012 that most of the hardware predictions he made when "Athens" was in development had come to pass as technology advanced.[13] 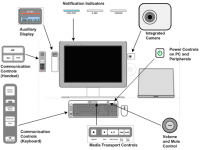 Illustration of "Athens" highlighting some of its main features.

The "Athens" PC is essentially an "all-in-one PC" in that it integrates most of the components traditionally encased within a desktop PC inside the case of its display monitor. A cable connects the display monitor to the main unit of the machine which houses a central processing unit (CPU) and other components.

Retrieved from ‘https://www.betaarchive.com/wiki/index.php?title=Athens_PC&oldid=25680’
Categories:
This page was last modified on 11 May 2020, at 19:48.
Privacy policy
About BetaArchive Wiki
Disclaimers