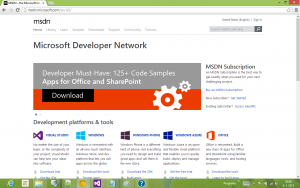 The Microsoft Developer Network, or MSDN as it is commonly abbreviated, is a service provided by Microsoft that allows people to have a wide range of software to evaluate.

MSDN discs are color coded so one can tell at a glance what kind of software might be on the disc.

Retrieved from ‘https://www.betaarchive.com/wiki/index.php?title=Microsoft_Developer_Network&oldid=19793’
This page was last modified on 20 April 2019, at 10:41.
Privacy policy
About BetaArchive Wiki
Disclaimers