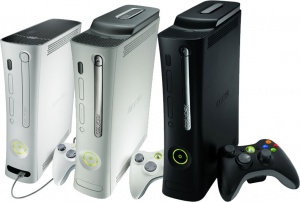 Xbox 360 is the second video game console produced by Microsoft, and the successor to the Xbox. The Xbox 360 competes with Sony's PlayStation 3 and Nintendo's Wii as part of the seventh generation of video game consoles. As of January 2011, there are over 50 million Xbox 360 consoles worldwide.

The Xbox 360 was officially unveiled on MTV on May 12, 2005, with detailed launch and game information divulged later that month at the Electronic Entertainment Expo (E3). The console sold out completely upon release in all regions except in Japan.

Some major features of the Xbox 360 are its integrated Xbox Live service that allows players to compete online, download arcade games, game demos, trailers, TV shows, music and movies and its Windows Media Center multimedia capabilities. The Xbox 360 also offers region specific access to third-party media streaming services such as Netflix and ESPN in the US or Sky Player in the UK.

At their E3 presentation on June 14, 2010, Microsoft announced a redesigned Xbox 360 that would ship on the same day. The redesigned console is slimmer than the previous Xbox 360 model and features integrated 802.11 b/g/n Wi-Fi, TOSLINK S/PDIF optical audio output, 5 USB 2.0 ports (compared to the 3 from older versions) and a special AUX port. Older models of the Xbox 360 have since been discontinued. The first new console to be released features a 250 GB hard drive, while a later, less expensive SKU features 4 GB internal storage.

With the announcement of the Xbox 360 S, Microsoft have said that they believe that the console is only mid-way through its life-cycle and will continue through 2015. In 2009, IGN named the Xbox 360 the sixth greatest video game console of all time, out of a field of 25.

Retrieved from ‘https://www.betaarchive.com/wiki/index.php?title=Xbox_360&oldid=23665’
Category:
This page was last modified on 26 July 2019, at 21:27.
This page has been accessed 377 times.
Content is available under the Creative Commons 3.0 ShareAlike (except the Microsoft KB Archive). unless otherwise noted.
Privacy policy
About BetaArchive Wiki
Disclaimers