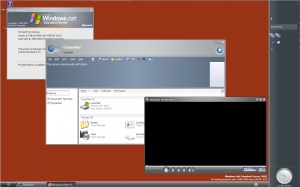 The screenshot that originated the leak.

Although it was described a "Server" build, it contained features typically seen in Longhorn client builds. These include: