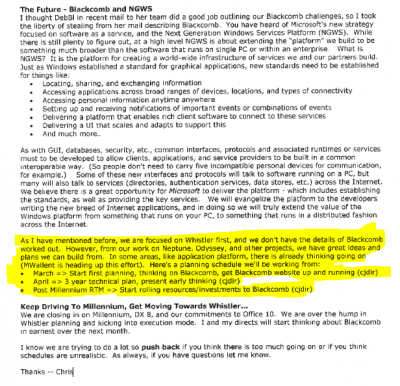 Microsoft Windows "Odyssey" is a cancelled version of Microsoft Windows, intended to succeed Windows 2000. It was also planned as new business version of Windows NT, but never came off the drawing board, as it was soon canceled along with Neptune.

The kernel version is unknown, though Paul Thurrot suggested it would have been NT 6.0 and ZDNet reffers to unknown sources that claim it was NT 5.5. The document PX09637 suggests that Odyssey could indeed have the version number 6.0, as it clearly states "...Neptune/NT6 team...". Knowing that Neptune is 5.50, it's only logical to conclude Odyssey was to be 6.0.
The team working on Odyssey was merged with Neptune's team which lead to the creation of Codename Whistler (ultimately released as Windows XP) which has two main editions, namely Professional and Home Edition, but there are also several other SKUs..
One Alpha build of Neptune was released to selected testers (build 5.50.5111.1, which later leaked to public). However, Odyssey is only mentioned in the Microsoft vs Comes documents, but even they are unclear as to what exactly Odyssey is and it appears to change between the handful of times it is mentioned. However, the most common occurence suggests it was actually a major update to be delivered after NepTune and Triton (which was scheduled to be a minor update to Neptune).

A small number of confidential documents from the Comes vs. Microsoft case discuss Odyssey, and do actually reveal that Odyssey was in the making.

Retrieved from ‘https://www.betaarchive.com/wiki/index.php?title=Windows_Odyssey&oldid=449133’
Categories:
This page was last modified on 31 March 2021, at 08:05.
This page has been accessed 624 times.
Content is available under the Creative Commons 3.0 ShareAlike (except the Microsoft KB Archive). unless otherwise noted.
Privacy policy
About BetaArchive Wiki
Disclaimers