Windows Neptune build 5111 is a Developer Release of Windows Neptune and a Milestone 2 build. At the moment, it is the only leaked build of Microsoft Neptune, though other builds are rumoured to exist.

The copy available on the BetaArchive FTP server is bootable, but requires a key and has a timebomb. It appears to be the original copy that was distributed to private testers.

Another copy is available on the internet, but it's de-timebombed and doesn't require a key.

A clean installation is recommended, but upgrading from Windows 2000 and Windows 98 is also possible.

The explorer in Neptune is often quoted as being a problem in Neptune, and is blamed for the slow startup on the first boot. The reason for the apparent hanging at first boot, is that a broken still image service is trying to startup, before explorer is loaded. Fixing or otherwise stopping the service from running should fix the slow startup. 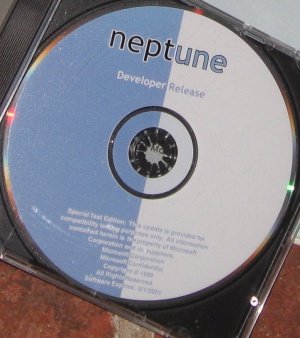 Inserting a Windows Neptune disc into a Windows XP computer will show a message saying "This CD-ROM contains a newer version of Windows than the one you are presently using. Would you like to install Neptune?" Same happens when you insert the disc into an already installed Neptune.

The Activity Centers' main layouts are contained in the "ACCORE.DLL" (Activity Center CORE.DLL), which is used to tie all the activity center resources together via the html layout extracted when the dll is registered (see the instructions below).

The Start page in 5111 was meant to be used as an Active Desktop page, otherwise it displays errors when trying to customise it.

The Photo Center is powered by an overhauled Image Acquisition service. This registry entry allows the service to work:[1][2]

To install the Activity Centers in this build, follow these instructions:

You can set the activity centers as a background, as it is probably meant to be, by doing the following:

After many years, extensive file edits, lots of research as well as trial and error, ex-BA member KenOath was able to fix the Activity Centers close to what Microsoft intended.

The Login Screen in Neptune is an HTML and JavaScript based UI. The Login Screen files can be found in logonhta.dll. Installing Internet Explorer 6 on this build usually causes the login screen to stop functioning, as well as some other issues.

On the top you can see the classic Windows logo and the word "Welcome" below it. Further down the page, a list of all accounts is displayed. On the bottom left is a shortcut for shutting down the computer (which, by default, triggers hibernation). Hovering over it, while holding SHIFT will change it into a restart shortcut and holding down CTRL will change the text into "Completely shutdown the computer" (this one does what it says). The computer's name is displayed on the bottom right.

An improved version of this login screen also appears in various builds of Windows Whistler (released as XP), first in build 2211, but it's not enabled by default. At some point later on, the login screen became DirectUI-based and was changed significantly.

The Login screen also displays a user picture for each user on the system, that can be changed via the User Accounts Panel. By default, Neptune includes 10 pictures, but users can also browse for more.

Neptune introduced 4 types of accounts ranging from Owner to Guest: 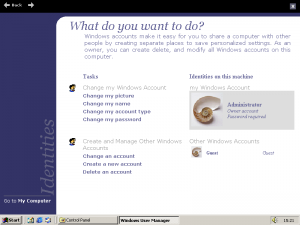 Officially known as "Windows Identities", this is yet another HTML and JavaScript based application, pretty much an early version of the Windows XP user accounts manager. Interestingly, it seems that the wording and layout did not change much even upto the RTM of XP. The source code for the applet is contained in nusrmgr.cpl. 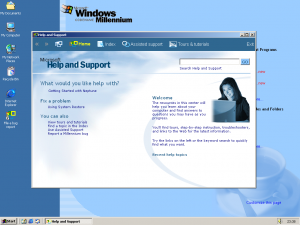 The Help Center in this build appears to be a direct copy from an early Windows ME build, as the internal branding and help text often contains references to "Windows Millennium". It is run by MSHTML and uses .htm and .xml files for most of the content, as can be seen in the data folder C:\WINNT\PCHealth\HelpCtr\System.

There is an intentionally commented out Windows 2000 Help Link (same help as the Windows 2000 RTM) in the homepage.htm code and the system restore Link points to a missing EXE in the winnt directory.

The database is a .mdb file and can be edited with Microsoft Access (after Whistler 2202, Microsoft switched to a different file format that doesn't allow easy editing); copying the database from early Windows ME builds should add the full range of support topics, however some broken help links will show up.

Using the HCupdate.exe in the binary folder and using the Cabarc.exe from the MS Cab SDK to create a properly configured .cab file allows updates to the Help Center database.

The bug reporting is launched via the "Help And Support Center" and is not linked to on the start menu, like most of the other HTML based apps it appears to be from Windows ME, as much of the branding still says "Windows Millennium". In this case, the bug reporting page itself is from Millennium build 2408, and the readme is from 2404.

There are two ways of launching the report a bug, one is via the desktop shortcut "Report a Bug" and the other is to click on the Comments link on the top of every dialogue/window, though the second option displays a dedicated dialog, rather then the Help Center page.

Creating a bug report still creates a cab file in the root of C:, however the reporting servers have been shutdown/re-purposed years ago. The source code of the page is in the file "bugrep.htm" in the vendor folder. 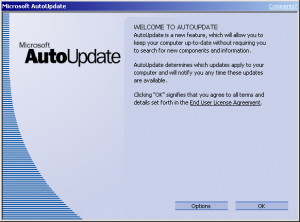 Microsoft Autoupdate in Neptune is hidden away in the C:\WINNT directory named wuauclt.exe (That could stand for Windows Update Auto Update Client). Copied directly from a Windows ME build this application was to form a part of the Automatic Updates.

This is another example of a typical HTML application in Neptune. The UI code is stored in wuauhtml.dll.

An executable with this name can be found in every leaked Millennium build, as well as Neptune. In early Millennium builds, the icon is a blue lower-case "m" on white background. Later on, it was changed to a yellow square smiley (";)") with black borders. The ProducName description states "Microsoft(R) Mars (R) Communications System".

Mars.exe serves as the framework (hence, the name "Mars Framework") for running web pages as framed applications. It also runs the User Accounts Panel and the Login Screen.[3] Mars uses the XML file in the folder of an Activity Center as the page's main layout. The msjava.dll also appears to be the number one dependency of this app, which Ken found when fiddling around with various msjava installations to get the Game Center working.[4]

Mars exists in retail Windows XP. The file marscore.dll (called "Mars"core because Mars was its beta name) has been renamed to pchshell.dll - which is "PC Health Shell". The pictures below show that the GUId and contents of pchshell from XP and the marscore from Neptune are the same. The only difference is that the Neptune version has an XML validator built into it.[3]

Fast boot appears in the Power Options Control Panel, but is only available if you install Neptune on a FAT formatted partition. On the next reboot Neptune optimizes the boot. Upon investigation of this feature, it appears that after enabling the option for Fast Boot, a sub-directory in the WINNT directory is created, called "boot", and a 2.4MB file is created, called 'bootimg.img'. The file contents appear to be an initial memory snapshot of the boot drivers and kernel. Further investigation is needed to see exactly how the bootloader uses this data. Even with this newly-found information, it is unknown what exactly this process actually does. It appears to be a yet another Neptune feature that wasn't included in XP. The feature is contained within fastbike.dll. 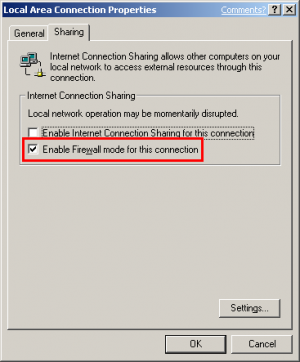 Neptune also seems to include a firewall, though it's very limited. There appears to be no settings interface and the only trace of this feature (which later made it's way into the RTM release of Windows XP) is a checkbox on each network connection's property page.

Neptune has a Prefetch folder like XP, and it does the same that it does on XP, but the folder is in System32. 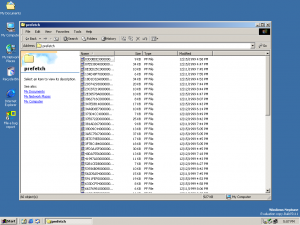 The branding in Neptune is inconsistent and incomplete. The setup, bootscreen and other new features say "Microsoft Neptune", while the rest of the OS still states "Windows 2000" (or Millennium in case of Activity Centers). This is understandable though, as the build is just in Milestone 2 stage and most of the UI is yet to be completed/updated.

The bootscreen is a direct copy of Windows 2000's bootscreen with slight changes, the most obvious being the new Neptune logo. The progress bar and sliding gradient image are also slightly different.

This program is in the system32 folder. 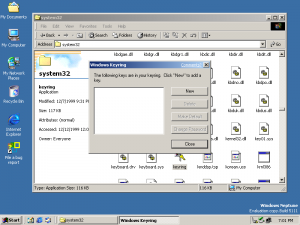 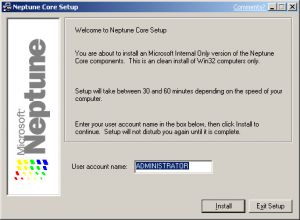 This EXE is included on the windows Neptune CD with the title "Neptune Core Setup". It looks as it was meant to download the latest Neptune files from a Microsoft server and proceed to install Neptune as an upgrade.

Many of the internal strings point this to being some kind of unattended setup program: 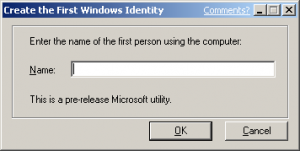 joindom.exe is set to start on first boot and is an internal pre-release Microsoft utility that sets up the first user name and appears to be part of an Out-of-box Experience.

Interestingly, the file version information points to it being a part of an upgrade setup. 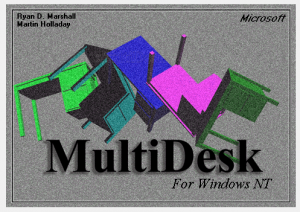 This is a file found in the i386 folder on the Neptune disk allows usage of multiple desktops (similar to many Linux based operating systems) and has the annoying habit of logging you off if you exit the program. First included in the Microsoft Windows NT 4.0 Resource Kit. 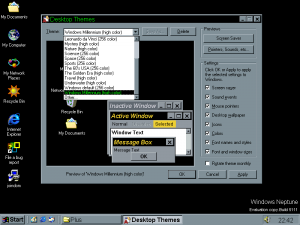 This file is found in the System32 folder. Copying the Plus! Pack themes from a Windows ME computer or the Windows 98 Plus! Pack and browsing to them allows basic (Windows ME/98) themes to be set in Neptune. 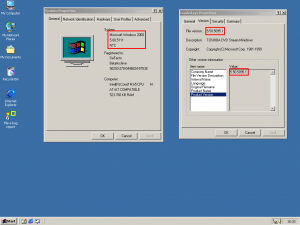 Some of the setup files in Neptune build 5111.1 contain references to "Neptune Server", but it is unknown if it is a typo or if the SKU ever existed.

Retrieved from ‘https://www.betaarchive.com/wiki/index.php?title=Windows_Neptune/5.5.5111.1&oldid=454269’
This page was last modified on 8 May 2022, at 03:58.
This page has been accessed 5,572 times.
Content is available under the Creative Commons 3.0 ShareAlike (except the Microsoft KB Archive). unless otherwise noted.
Privacy policy
About BetaArchive Wiki
Disclaimers