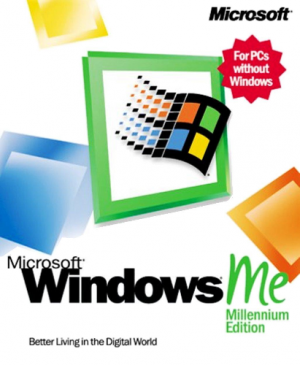 Windows Millennium Edition (referred as Windows ME) was the last 16/32 bit hybrid version of Microsoft Windows. It was released to manufacturing on June 19, 2000 and to retail on September 14, 2000.[1] It was criticized due to its instability, and was sold on the market for a total of 402 days before being superseded by Windows XP on October 25, 2001.[2] Some components of Windows 2000, such as the TCP/IP stack, were ported to Windows ME.

Retrieved from ‘https://www.betaarchive.com/wiki/index.php?title=Windows_ME&oldid=449129’
Category:
This page was last modified on 31 March 2021, at 08:03.
This page has been accessed 3,549 times.
Content is available under the Creative Commons 3.0 ShareAlike (except the Microsoft KB Archive). unless otherwise noted.
Privacy policy
About BetaArchive Wiki
Disclaimers