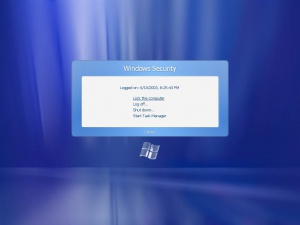 The Windows Security screen in build 4029.

This build was among the first to use the Pig Latin, onghornLay rofessionalPay, in the desktop version string, causing some to doubt its authenticity; however, this was part of the testing Microsoft had done to propagate the product name and version number throughout the operating system, in order to dramatically simplify the naming process.[1] In previous versions of Windows, changing the product name or version number was a difficult task which required manually editing information in many areas of the user interface.[2]

New features in this build include improvements to the Windows Explorer shell, larger file previews while hovering with the mouse cursor, column level filters, an analog clock interface, and batch processing of images, which allows multiple images to be rotated simultaneously.