From BetaArchive Wiki
< Windows 8
Jump to navigation Jump to search

The default wallpaper is a green, checkered area with something like a crossword puzzle and the note "shhh... let's not leak our hard work". The opinions whether the puzzle can be solved are divided. As of 2020, nobody has found a working solution.

The other included wallpapers are the ones already known from Windows 7. 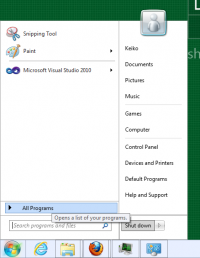 This build includes a modified Aero theme and the new, unfinished Aero Lite theme. The Basic and Classic themes have been removed and were replaced with the new Aero Lite theme, which, like Classic, uses colors rather than image resources to render, but is being hosted in a .msstyles file instead of being hardcoded.

Future builds are rumored to have the "old" Aero theme replaced by a Aero Lite theme with transparency and other DWM effects.

The Aero theme has been modified in a few locations. 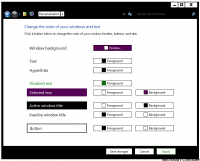 The Aero Lite theme is the replacement for the basic theme and classic themes. As in classic themes you can customize the colors of different window elements.

The major difference is that Aero Lite is rendered using the DWM, so Windows 8 probably won't contain the old theming engine which directly uses the CPU. For compatibility with old machines or mobile devices like tablets, a WDDM-compatible rendering device can be emulated, but the performance is reported to be pretty bad.

Various changes have been applied to several user interface elements.

Windows Explorer has underwent some changes. In this build, the Superbar contains two new items:

The file manager also has been modified:

The crossword in the desktop background was solved a few years later and it turned out to be "START ME UP", a reference to the Windows 95 promotional ad.[1]