A screenshot of this pre-release version can be seen here. Notice that the Windows logo in the "About Windows" dialog box has changed since Beta 1. 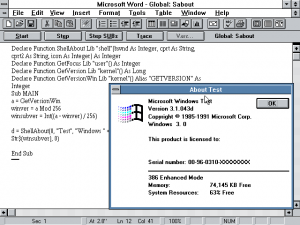 According to a series of e-mails at Microsoft from August 26th, 1991, aside from other things mentioned such as possible MS-DOS upgrade options, the same document discusses problems with general protection faults under a debug compile of this build when disconnecting DDEML.

It is also mentioned that there is a problem with Arial founts in Microsoft Windows 3.1 Beta 2 using the IBM 4019 postscript driver.

To test, the user would first need to run Microsoft Word for Windows (WINWORD.EXE), then switch the font to Arial, and then type in a sentence (such as "this is a tab"). In this case, tabs will appear on the same line, rendering documents formatted with the Arial font unusable.