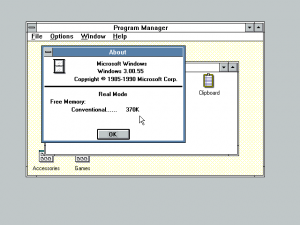 At this point, the product was nearly finished in terms of features and overall usability, and aside from major memory improvements over Windows 2.x, would also include a completely redesigned graphical user interface, namely the Program and File Manager to replace the MS-DOS Executive seen in previous versions of Windows.

A personal computer magazine, InfoWorld, has a full article demonstrating a version of Microsoft Windows 3.0 from this time period in an issue from January 1990.

This version should be installed on a machine running MS-DOS 4.0, IBM DOS 4.0, or Compaq DOS 3.31 in order to take advantage of the new features available in this version of Windows.

Version numbers shown in About dialogs

Paintbrush contains the following warnings in this pre-release version of Microsoft Windows 3.0:

This pre-release version includes Windows Help version 3.00.2000. It may also occasionally crash with a Divide by Zero error due to faults in the pre-release code.