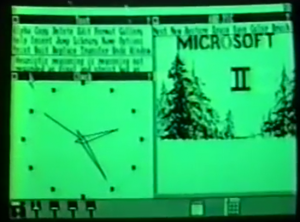 This early pre-release version of Microsoft Windows was demonstrated at the COMDEX 1983 trade show.

The user interface has changed significantly since the previous version shown in the BYTE Magazine December 1983 issue.

The session-control layer has since been removed and various other parts of the user interface have been restructured. Controls for each application are now shown in separate windows rather than a fixed area of the screen, making general usability far more convenient for users.

Since the removal of the session-control layer, minimized applications can also reside as icons in the bottom of the screen area. This allows for easier switching between currently running tasks.

One major change since the previous version is the introduction of Windows applications for use on a daily basis. These include a graphics viewer, the "Text" editor for opening text files, and early versions of Clock and Calendar.

The MS-DOS command interpreter (COMMAND.COM) and all other MS-DOS-based applications can be accessed from the "MS-DOS 2.0 Window". Note that Windows allows for co-operative multitasking of both MS-DOS and Windows-based applications. Much like with PC-DOS and MS-DOS, file management was done from the same "MS-DOS 2.0 Window" which acted as a replacement for COMMAND.COM in Microsoft Windows.

Shown on drive A: are the following files (listed in alphabetical order):

This pre-release version also featured support for WANG machines in addition to the IBM Personal Computer and compatibles.

Retrieved from ‘https://www.betaarchive.com/wiki/index.php?title=Windows_1.0/COMDEX_1983&oldid=452744’
Category:
This page was last modified on 12 September 2021, at 18:18.
This page has been accessed 1,285 times.
Content is available under the Creative Commons 3.0 ShareAlike (except the Microsoft KB Archive). unless otherwise noted.
Privacy policy
About BetaArchive Wiki
Disclaimers