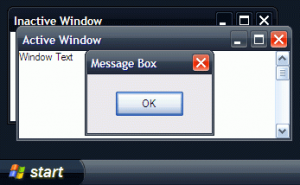 Royale Noir as it appears in Windows XP.

Royale Noir is the name of an incomplete[1] visual style for the Microsoft Windows XP operating system. It was brought to light by Channel9 member, W3bbo.[1]

It is primarily black in appearance, resembling later builds of Windows Vista. Due to the theme being incomplete, there are a number of visual inconsistencies, such as inactive titlebars being too dark, and colors not blending in with other bitmaps.