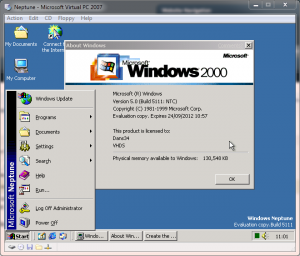 Virtual PC is a popular virtualization program for running different operating systems on top of Windows and Mac OS. It was first released in 1997 and has now been discontinued, partly in favour of Hyper-V.

Virtual PC for Mac has always been slow. The reason why is it has to emulate an entire x86 PC, as the PowerPC architecture cannot virtualize x86 software.. It was for this reason that Virtual PC for Mac wasn't a huge hit. It did however have some compatibility with running some programs that would only run on Windows, such as some DOS games that wouldn't natively run on a mac.

Virtual PC 3-5 are other versions of Connectix Virtual PC. They ran on various versions of PowerPC Macs but would never run on Intel macs for there weren't any at the time and when Intel macs did come some time later Rosetta wouldn't run Virtual PC for Mac (tested on 2.26 GHz C2D iMac running OS 10.5.8).

Microsoft bought Connectix's Virtual Technology in February of 2003 they released Virtual PC version 6 for Macintosh. It would only run on Mac OS X 10.2.8+ and require at least a G3 PowerPC processor. It was still quite slow because it still had to emulate the entire x86 PC architecture in software. Microsoft also released Virtual PC 7 for Mac in 2004. It added support for PowerPC G5 Macs and added support to print from a VM without needing to install special print drivers on your host computer.

Retrieved from ‘https://www.betaarchive.com/wiki/index.php?title=Virtual_PC&oldid=447340’
Categories:
This page was last modified on 14 December 2020, at 12:18.
Privacy policy
About BetaArchive Wiki
Disclaimers