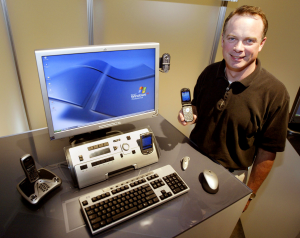 "Troy" is the codename of a prototype personal computer developed in 2004 by Hewlett-Packard in collaboration with the Microsoft Corporation. "Troy" was announced alongside the Hermes PC during the Windows Hardware Engineering Conference of 2004 (WinHEC 2004) as the successor to the previous Athens PC concept that was demonstrated a year prior.

Like "Athens," the "Troy" PC was built primarily with collaboration in mind. The prototype introduced several new hardware features, such as a dock for a personal digital assistant (PDA) which would allow the latter to be used as a secondary display to present additional information. Notably, the hardware design for "Troy" differed considerably from "Athens" in that the prototype did not include a specialized keyboard with built-in hardware controls for media and other features; the controls were instead relocated into a console located directly underneath the prototype's display monitor. The decision to relocate these controls was based on feedback from users who stated that they desired to use their own keyboards without losing the features previously offered by the hardware controls new to "Athens."[1]

The PC would be the last known prototype developed by HP for Windows "Longhorn" and was intended to be the last major prototype unveiled before the company would release a shipping product.[1]

Retrieved from ‘https://www.betaarchive.com/wiki/index.php?title=Troy_PC&oldid=450009’
Category:
This page was last modified on 15 April 2021, at 01:27.
This page has been accessed 455 times.
Content is available under the Creative Commons 3.0 ShareAlike (except the Microsoft KB Archive). unless otherwise noted.
Privacy policy
About BetaArchive Wiki
Disclaimers