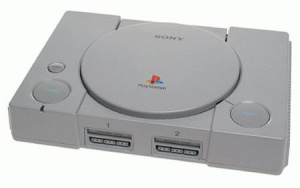 PlayStation (sometimes referred to as PlayStation 1), was the first of the ubiquitous PlayStation series of console and hand-held game devices. It was released in December 1994. The brand includes successor consoles and upgrades including the Net Yaroze (a special black PlayStation with tools and instructions to program PlayStation games and applications), "PSone" (a smaller version of the original) and the PocketStation (a handheld which enhances PlayStation games and also acts as a memory card). It was part of the fifth generation of video game consoles, competing against the Sega Saturn and the Nintendo 64. By March 31, 2005, the PlayStation and PSone had shipped a combined total of 102.49 million units, becoming the first video game console to reach the 100 million mark.

Retrieved from ‘https://www.betaarchive.com/wiki/index.php?title=PlayStation_(console)&oldid=446814’
Categories:
This page was last modified on 20 October 2020, at 20:47.
This page has been accessed 131 times.
Content is available under the Creative Commons 3.0 ShareAlike (except the Microsoft KB Archive). unless otherwise noted.
Privacy policy
About BetaArchive Wiki
Disclaimers