Microsoft Office 2013 was released on the 29th January 2013, and has version number 15.0. It features the tabs system from Office 2010, however with a Metro design. 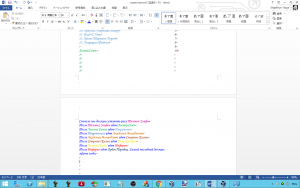 A technical preview was released in early 2012:

The Consumer Preview (public) was released on July 16, 2012 and was scheduled to expire 60 days after the release of RTM.

Apart from Office 2013, Office 365 has been used. Office 365 has been advertised and sold with by more computers, which introduces a subscription program by Microsoft by paying per year and receiving the new product once it has arrived. This method has been widely criticized, making many users confused between what Office 2013 and Office 365 is, keeping people from using this version.

Retrieved from ‘https://www.betaarchive.com/wiki/index.php?title=Microsoft_Office_2013&oldid=24747’
Category:
This page was last modified on 1 February 2020, at 15:45.
Privacy policy
About BetaArchive Wiki
Disclaimers