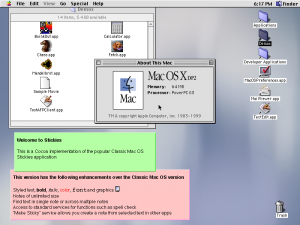 Mac OS X Server 1.x was based on the NeXT technology. It is also the commercial release of the Rhapsody project.

Mac OS X began as Rhapsody in 1997, the codename/interim version of a combination of OPENSTEP port to Motorola 68k processors. Rhapsody was released only to developers. The kernel of the OS is named "Mach microkernel", and as it is based on BSD, it is the very kernel we normally see in operation during startup today. There is also compatibility for "Classic" Mac OS programs. In 1998, CEO Steve Jobs announced OS X Server 1.0, which is the fruit of Rhapsody.

Mac OS X Server 1.0 was a mix of Mac OS and NeXTSTEP features. It looked like Mac OS 8.0, but has features that would turn into what we know from Mac OS, such as the white light underneath active but minimized programs. Carbon, which is essentially OS X APIs, were absent. Instead, the NeXTSTEP "Yellow Box" API were chosen as the native APIs for Mac OS X Server 1.0 applications. The APIs soon turned into Cocoa. It is also the first Macintosh version to feature NetBoot. There is also the "Blue Box", which allowed emulation of Mac OS 8 and 9 to run in a separate process. The function became the "Classic Environment", a software last seen in Mac OS X 10.4. Mac OS X Server 1.0 is the codebase of Mac OS X.

Work began on Mac OS X 10, and the first 2 previews looks similar to Mac OS X Server 1. However, with Developer Preview 3, Aqua is revealed. It gave the Finder and windows the look of brushed metal, and new glass dock we find today, and the taskbar on top is given more "modern" designs. The Apple logo is a blue gradient, and the taskbar is white instead of gray from the "Platinum" theme. There are also 3D depth given to the logos in the new OS. Also, Mac OS X Developer Preview 3 shows a Apple logo in the center top of the screen instead of the usual left. Changes to the kernel included multitasking and protected memory. This was demonstrated by CEO Steve Jobs using bomb.app, an app intended to fail and crash.

Retrieved from ‘https://www.betaarchive.com/wiki/index.php?title=Mac_OS_X_Server_1.x&oldid=25430’
This page was last modified on 11 April 2020, at 20:51.
Privacy policy
About BetaArchive Wiki
Disclaimers