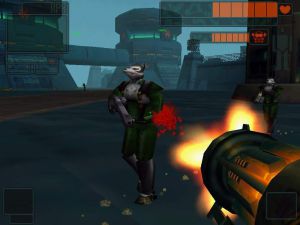 Kanaan is a cancelled game that was scheduled for release in 1999. It was made by Argonaut Software and was going to be distributed by UbiSoft.

The action takes place in the distant future, where for hundreds of years is a war between humans and a race of anthropomorphic dogs - Kanaan. In order to reverse the outcome of the war in their favor, Kanaan decided to seize peaceful Kamros neutral planet, inhabited by creatures almost identical to people. On Kamrose no troops, there is only a small detachment of Special Forces for emergency situations - Chaos Squad, who is killed in the first battle with the invaders after their invasion. They survived a squad captain Isaiah and one of the men - Gabriel Kane, were seriously injured and left his commander to die. Fortunately, he was rescued and cured Desteni Harper, head of the civilian population Kamrosa organized resistance movement. From it he learns that, it turns out, Captain Isaiah had long known of the impending invasion of Canaan, but not only did nothing to organize the defense, but also engaged them in a conspiracy in exchange for a promise by the alien to allow him to become adviser to the governor after the occupation. Now all hope enslaved planet - by Gabriel and a small detachment of the Resistance, who set a goal - to liberate their homeland or die.[2]

Retrieved from ‘https://www.betaarchive.com/wiki/index.php?title=Kanaan&oldid=25452’
Categories:
This page was last modified on 14 April 2020, at 12:42.
Privacy policy
About BetaArchive Wiki
Disclaimers