macOS (formerly Mac OS X) is an operating system for Apple Macintosh computers,[1] first released to the public on March 24, 2001, developed by Apple. It is the successor to Mac OS 9, hence the X signifying both its Unix roots and the major release version number 10. As mentioned by Apple, Wikipedia, and others, it is said as Mac OS 10. It shares none of the "Classic" Mac OS design, and is completely rewritten and uses Next frameworks, a hybrid XNU/Mach kernel, and a BSD subsystem dubbed "Darwin". While underlying components of OS X are free/open source software, the top layers, such as the Aqua UI, are proprietary; Darwin packages can be downloaded and compiled from the Apple Open Source website to make a bootable OS.

Mac OS X has been built for three different architectures and four platforms during its release cycle to date. The first six releases (10.0.0-10.5.8) were designed for the PowerPC architecture, adding 64-bit PowerPC support as an additional platform for the G5 in 10.3 Panther. Intel (x86) support started with 10.4.4 Tiger, and was built as a universal release for both PowerPC/x86 with 10.5 Leopard, which finally dropped all G3 support. Since 10.6, PowerPC support is non-existent/dropped, and Mac OS X is currently designed for Mac computers with Intel 32-bit (x86) and Intel 64-bit (x86_64) architectures. AMD is not currently officially supported. Starting with 10.7 "Lion", Mac OS X is now referred to simply as "OS X".[2]

Screenshots of this build were shown in the BYTE magazine in 1984. It has a black default background and has the Arrange menu.

An update to 0.97, had slight changes but is otherwise the same. The most common version of pre-System 6 OS'es.

This version came up on 2 disks packed with developing / debugging software. This used to be a rare version until it was later leaked on BetaArchive.

Technically the same as System 1.1, yet has several bug fixes.

System 6 was released in April 1988. Cooperative multitasking made its Macintosh debut in March 1985 with a program called Switcher, which allowed the user to launch multiple applications and switch between them. However, many programs and features did not function correctly with Switcher, and it did not come with the operating system, so it had to be acquired from Apple separately. System 6 featured a much more seamless approach called MultiFinder. MultiFinder originally debuted with System 5 (System file 4.2 / Finder 6.0). Multitasking under System 6 was optional — startup could be set to Finder or MultiFinder. If MultiFinder was selected, the Finder and its functions continued to run when an application was launched. The MultiFinder environment allowed users to see past the windows of running applications to view Finder icons such as the Trash, or the windows of other applications running in the background.

Mac OS 7 (codenamed Big Bang) was initially released in May 1991.

Versions 7.0 through 7.1.1 worked only on the 68k platform. Later, version 7.1.2 added support for PowerPC processors.

Copland was the codename for an unreleased Mac OS version that was intended to be the modernized successor to Mac OS 7.

The Copland project started in March 1994 and was eventually cancelled in August 1996.

Initially, the early beta releases of the product which were circulated to developers and Apple internal audiences, were branded as Mac OS 7.7 (superseding the current release, Mac OS 7.6). Afterwards, the software was later renamed to Mac OS 8 before the final release. The first two releases of Mac OS 8 can run on Motorola 68k processors, however version 8.5 dropped support for the 68k platform, only supporting PowerPC-based models. 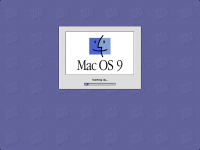 Mac OS 9 (codenamed Sonata) was released on the 23th of October 1999. Its development had been discontinued in May 2002.

Mini vMac, a 68k Macintosh emulator running on the iPhone

There are few 68k Macintosh emulators available today, which have been ported to various platforms and operating systems.

One of them is a PowerPC emulator called "SheepShaver", which runs Mac OS 7.1.2 through 9.0.4, and has been ported to various operating systems. The reason Mac OS 9.1 and up won't run in SheepShaver is that SheepShaver lacks a Memory Management Unit emulator, something that the last few Mac OS releases need.

Retrieved from ‘https://www.betaarchive.com/wiki/index.php?title=MacOS&oldid=453547’
Category:
This page was last modified on 20 February 2022, at 04:15.
This page has been accessed 3,962 times.
Content is available under the Creative Commons 3.0 ShareAlike (except the Microsoft KB Archive). unless otherwise noted.
Privacy policy
About BetaArchive Wiki
Disclaimers