It was opened in August 2006 by Andrew Whyman who goes by nickname Andy and is currently managed by Andy with the assistance from co-admin mrpijey and the moderators. The site features a FTP server which is accessible once a user has attained the FTP Access status on the forum.

The forum has received 3 updates, first v2.0, which was introduced with the upgrade to phpBB 3.0; 2.1, which was more of a forum revamp, and then v3.0, which upgraded the forum to phpBB 3.3 and hence introduced a fully responsive theme.

The wiki (this site) is somewhat separate from the forum, please read BetaArchive Wiki:About. It has different permission groups with different contribution rules.

The Administrators and Staff form the BetaArchive staff. Both groups are invite only and perform the housekeeping duties necessary for the forum, including but not limited to deleting nonsense, approving posts and blocking users.

The FTP Access group is accessible by uploading one or more unique or improved release(s) to the FTP, followed by applying for membership in the user Control Panel.
This will give you access to most of the restricted forums and an FTP account with 50GB limit per day and locked to your IP (subject to a fair use policy).
Previously, no uploads were required and only 10 contributing posts were required. With effect from July 28, 2014, that is no longer the case.

The VIP group was meant to be invite only, for those who done major contributions, no matter if posts, Wiki edits, uploads etc. This group has one member, which is viper. 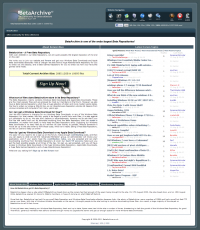 Retrieved from ‘https://www.betaarchive.com/wiki/index.php?title=BetaArchive&oldid=26449’
Category:
This page was last modified on 16 June 2020, at 08:52.
Privacy policy
About BetaArchive Wiki
Disclaimers