If you ever heard of Windows odyssey (I assume you have), it is one of the most unknown versions of Windows. Unlike Neptune/triton, Odyssey does not have much news behind it and also does not have any builds leaked.
But my question is, What NT range was Odyssey planned to be at the time?
A Microsoft document from 1998 states that Neptune and Triton would be similar releases both released sometime in 2001.
From what we know. It was similar to Whistler in many ways.
I would assume the NT version could potentially be 5.1 but it could then also be around the range of 5.1-6.1.
Top

I think it was planned to be NT 6.0 according to unverified sources.
We stand with Ukraine
Top

and he is terrible source to have
Top 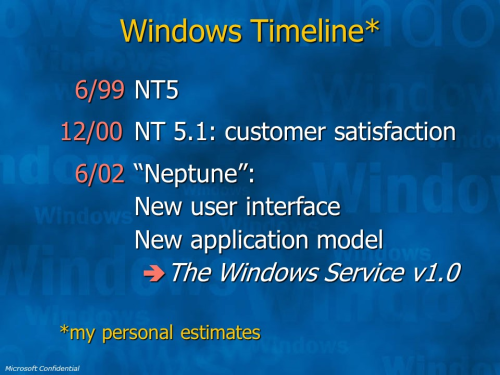 I don't think that that reference to Windows NT 5.1 is a reference to Odyssey. Neptune has version number 5.5; and according to the antitrust documents, Odyssey was intended to be its successor. If NT 5.1 in the above timeline is Odyssey, that would imply that that Odyssey was going to be released before Neptune.
Top

Random_User wrote: ↑
Thu Jun 23, 2022 12:29 am
... according to the antitrust documents, Odyssey was intended to be its successor. If NT 5.1 in the above timeline is Odyssey, that would imply that that Odyssey was going to be released before Neptune.

Antitrust documents don't actually mention Odyssey pretty much at all and contemporary press describes Odyssey as the business-focused successor of Windows 2000 while Neptune would have exclusively focused on the home consumer market.

Some internal docs also mention that the source depot for Odyssey was planned to be set up in January 2000, although that obviously didn't end up happening.
AlphaBeta, stop brainwashing me immediately!

thats interesting that it says NepTune would have a new interface! I thought it would just be windows 2000's interface. This could mean the professional theme from builds like 2223 could possibly have been meant for NepTune or was it something else? Maybe Candy was meant for Neptune!
because from what I know, the only interfaces we never seen were some of the core OS interfaces (Polaris/10X), the early cario interface (likely just some beta of 95), and the planned Blackcomb interface!

I would assume builds of NepTune that we found from file versions (later builds) could exist and if they do they could include/have information on these theme's (I'm talking 5116/5117 to 5200)
If NepTune and Odyssey never merged. We would maybe have some NepTune x Luna interface while Odyssey would keep the classic theme (its server).

Did NepTune and Odyssey ever merge? I could see Odyssey becoming XP and NepTune/Triton being deleted/becoming part of Blackcomb/Longhorn
Speaking of Blackcomb here, Blackcomb would very likely be NT 7.0 from what I know and Longhorn is 6.0 (Earlier builds could have been 5.2).

If Odyssey was also gonna have builds in January 2000, we would certainly have some proof by now (either a build or some Microsoft confirmed images) bearing the project cancellation around that time that probably Microsoft would make an earlier compile that would be just like 2000 but with bug fixes.

edit: Early builds of Odyssey if they exist could possibly be directly related to early builds of whistler although we have no proof.

another edit: 2202 from XP could somewhat be some sort of cancelled version of Odyssey, People couldn't tell much of a difference from 2195 and this build (even though XP was early at the time) but I would Assume odyssey work could have been like Blackcomb and Longhorn where Most features would have been Ported into Neptune before cancellation/being merged.

Another thing: Triton would have probably have the NepTune build number/range.

In light of that, build 5000 (if it exists) might not be as early of a build as the above quote suggests. It might be a preliminary build, in which case the logo change in the A.Nonymous screenshot would be questionable. Likewise, it might just be an earlier Milestone 2 build than 5111.1, in which case the logo change wouldn't be particularly unusual (and in fact would be consistent with the multiple changes to the Whistler logo in similarly early development stages).
Top

thats interesting that it says NepTune would have a new interface! ...
...
...

and it did have, it was activity centers, and they were disabled or half baked in
tbh youre doing too much sci-fi out of this
Top

and it did have, it was activity centers, and they were disabled or half-baked in
tbh you're doing too much sci-fi out of this

By new Interface, I would imagine also a new theme to match up, and not something too much like luna, something like the professional theme would only change window borders, start menu, the colour of the classic theme, and start logo (in 225X range)
That's how I got the Idea that Candy could have originally been in late NepTune (if late NepTune existed). But again I could be wrong

I heard that NepTune was actually still worked on at the time and was actually in a Beta 1 stage before Whistler and Whistler Server became the main focus.

But that's out of focus, Professional wasn't a big upgrade from classic, only the new window borders, start menu, and applications were the big thing and most people would think it was still classic with some added features (at the time was major in 98SE, 2000, some ME)

I would say the only way to see if this is true is by attempting to load these 2 themes in NepTune and if they ran well they could have been imported back which would mean that somewhere out there is a late NepTune build!

I know that's out of focus but I think someone may find another build someday... I would say the late Milestone builds the rarest ones (Kinda like if we got Whistler 2426 right now)

Another out-of-reach thing is, what if Triton was meant to have Luna before they cancelled it? Triton was like a Service Pack but included much more changes...
Top

if they used candy they'd get lawsuit up their ass


Triton was like a Service Pack but included much more changes...

it wasnt anything, it was never done
Top


Triton was like a Service Pack but included much more changes...

it wasn't anything, it was never done

Also, that was the plan for Triton I know it was not finished. I guess I said it wrong but it was planned to add more changes and may have originated the idea of luna
Top

Well, from what we know, Neptune didn't really last for that long, so I think a jump to 5000 is pretty likely. I believe the reason behind the build number jump as well as the 5.50 version number was to synchronize Windows version with the one of IE. Now from what we see in 5111, this didn't end up happening during Neptune, as we see IE components still using their own build numbers.

However, it was ultimately implemented during Whistler, although the other way around -- IE reset their build numbers to match Windows.