1. Don't post a request if you have under 10 posts as stated in the rules. If you do anyway, it will be deleted without further notice.
2. Requests for anything against our rules will not be entertained and you will be warned.
3. Check that we don't already have the file on our FTP servers by using the database linked in the navigation.
Post Reply
4 posts • Page 1 of 1

Microsoft offered trial versions of their Microsoft Expression suite until its retirement at the end of version 4. Before retiring the product they released several products entirely free that did not require the user to enter a product key, similar to how Adobe released several of their EOL products for free. This offer is for those final EOL versions: 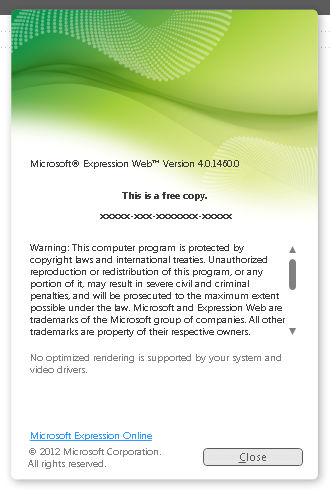 I never found any of these products other than the encoder to be very useful. Why use Expression Design over Illustrator or Expression Web over Dreamweaver? I could never find use case for Expression Blend and SketchFlow.

Expression Media was interesting but it was dropped after the suite moved to version 3.

I guess these products were geared towards people looking for an easy way to integrate Silverlight into their workflow?
Top

I found Expression Web to be very helpful. It's really a successor to FrontPage, which my parents used all the time.
Top
Post Reply
4 posts • Page 1 of 1