Project: Installing every build of Pre-Reset Longhorn in vmware

Project: Installing every build of Pre-Reset Longhorn in vmware

The pre-reset builds of Windows Longhorn have always been my favorites. I just recently got a license for VMware Workstation Pro 16, and I think this is a good first project for me with the new version! So, let's go thru every build to note any challenges with this project of mine.
This could also help with anyone who is having trouble installing a particular build, since I'm putting installation notes for each one.
How on earth do I have the space to install all of these you may ask? I have an external 2TB hard drive. Even still, if I move on to post reset or other windows versions after this, I may need to upgrade again!

Milestone 4
Milestone 4 builds are really broken when it comes to the new WIM setup. This causes much annoyance when installing them in VMs, but they are all still possible.

4015.main.030328-1500
Most copies of this build have a broken WinPE, but the version on the BA FTP doesn't have this issue, so I won't have to use the Longhorn packet with this build. Update: Installed
4017.main.030409-0735
This build's Preinstallation Environment is broken, so I will have to use the Longhorn Packet to install this build. Update: Installed. I got a file copy error, so I took the install.wim from 4017 and put it into the 4015's ISO image. That worked, and I've got it now. It froze on "please wait" but I restarted and then I was sent to the desktop. All the drivers had to be manually installed, but it worked besides that.
4020.idx02.030507-1155
No issues with installation. Update: Installed
4029.main.030619-0000
This build's setup will crash on Workstation 16, but I installed it already on version 15, so I won't have to deal with that. If you need to install it on version 16, use the WinPE from a previous build. More conveniently, you could use the Longhorn Packet, which I am using a lot in this project.
4030.main.030626-1414
This build has the same setup issue as the last build. I will try the Longhorn Packet, but if that doesn't work I will have to install workstation player 15 and install it there (if hardware compatibility doesn't work) Update: Installed. Didn't need to do anything other than set the hardware compatibility back to 6.5-7x.
4031.main.030703-0020
No issues with this build. Update: Installed

So, that's it. Wish me luck! I will update this post as I install builds. 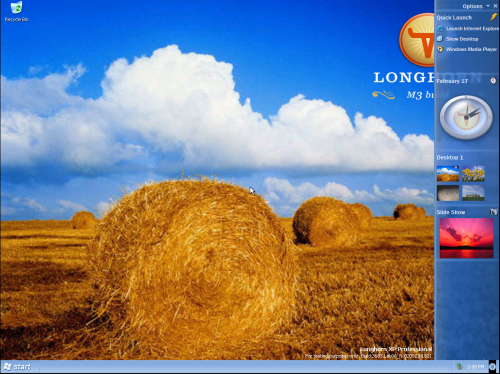 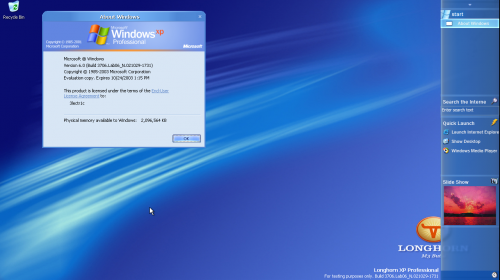 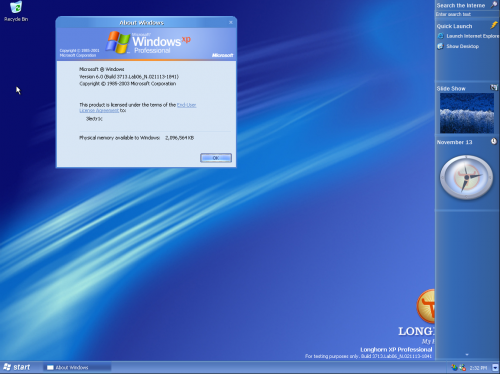 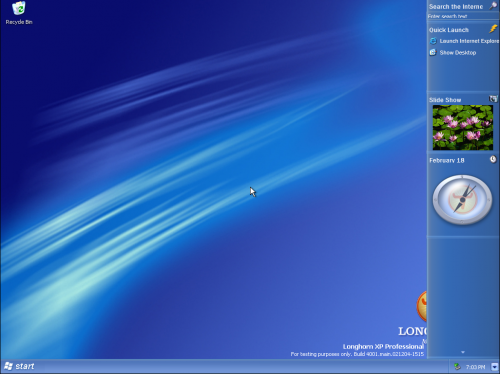 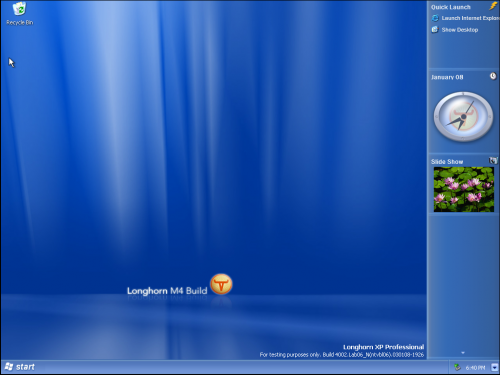 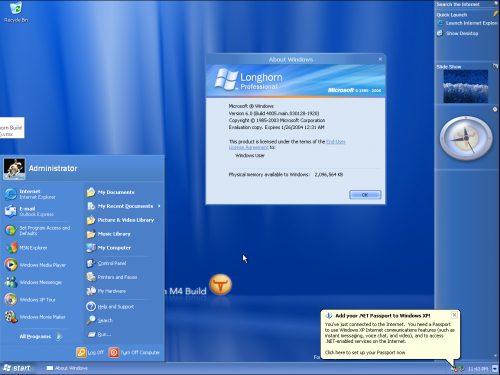 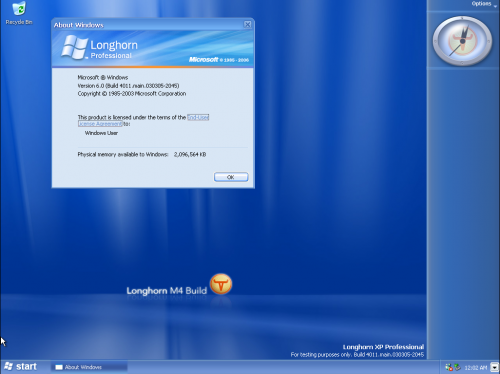 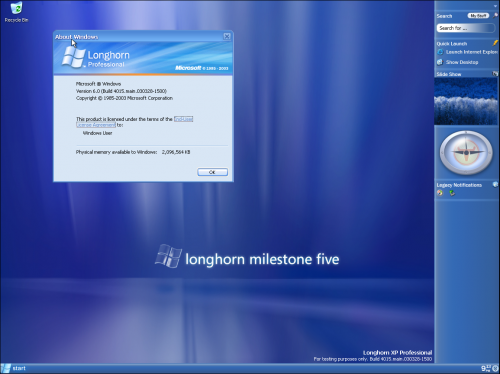 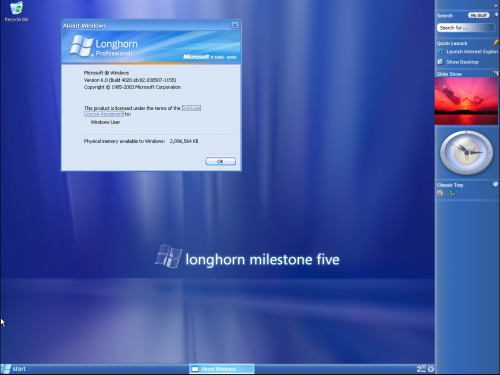 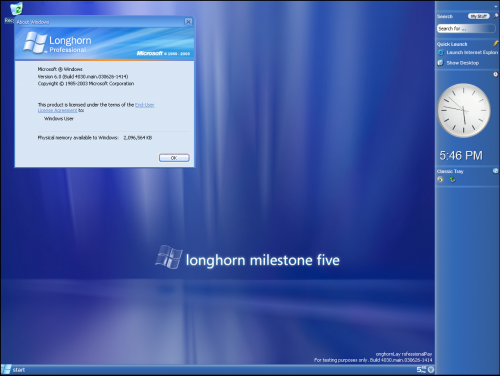 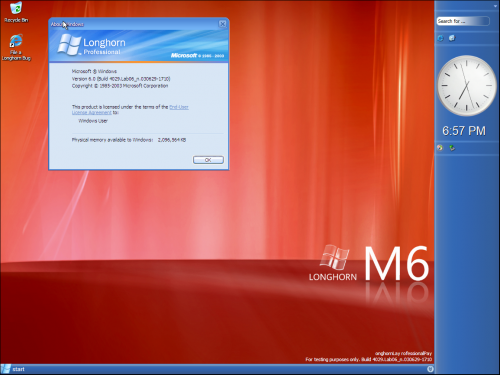 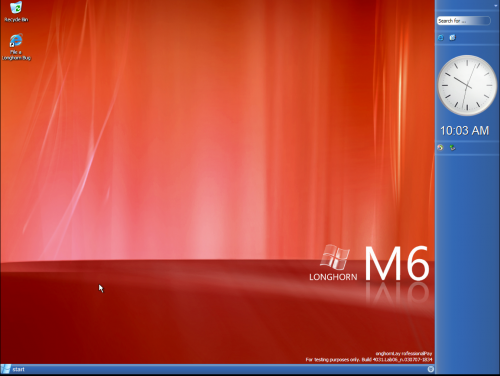 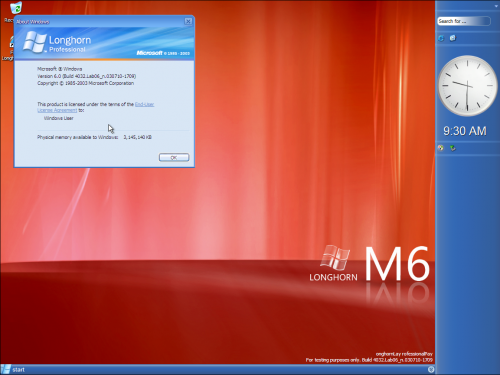 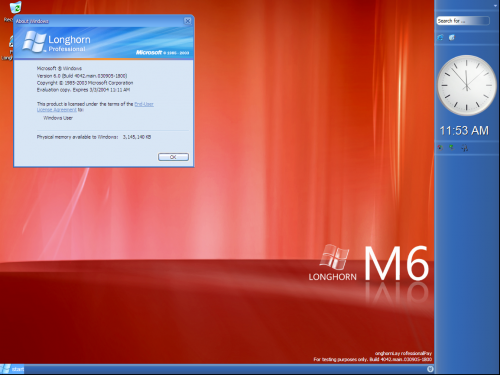 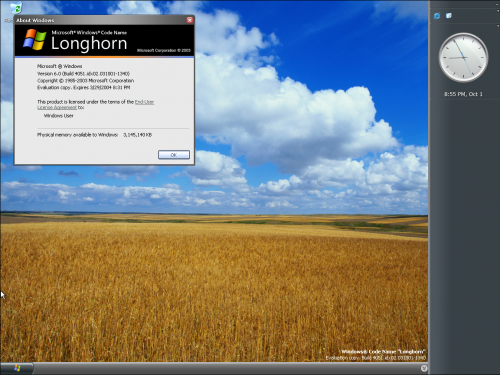 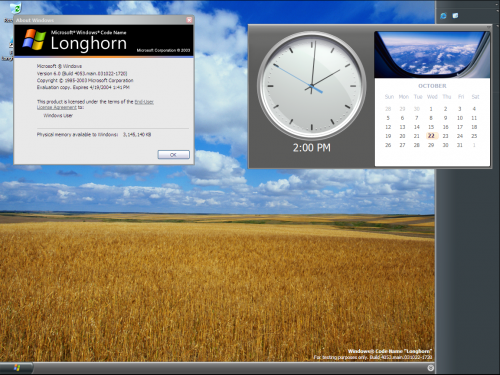 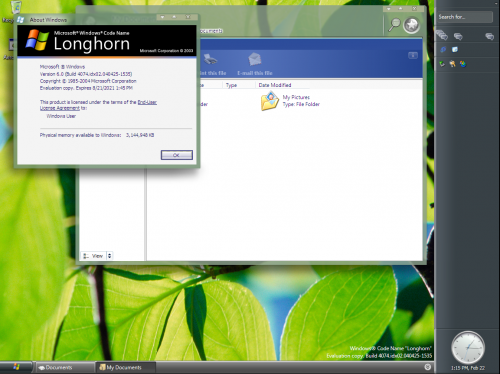 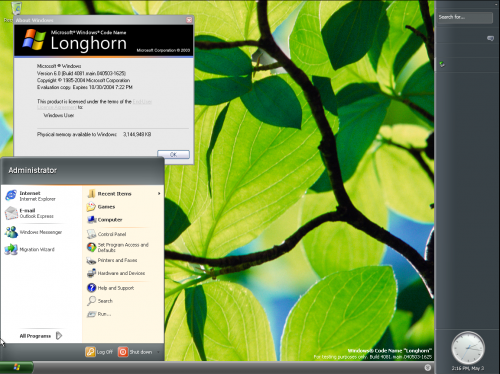 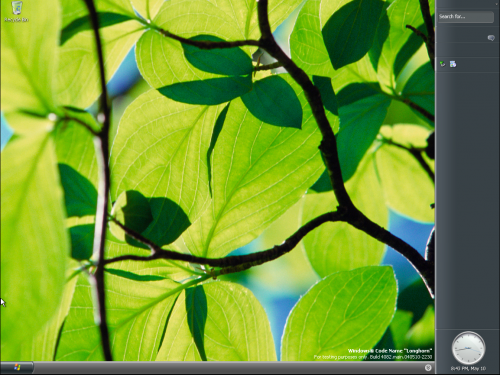 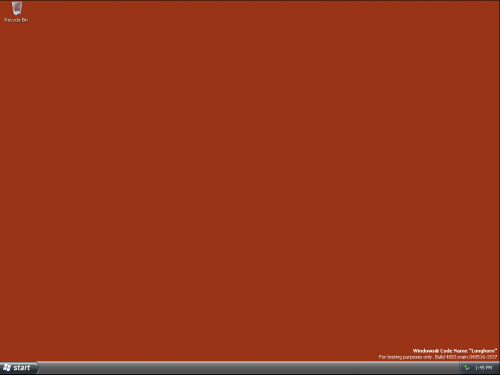 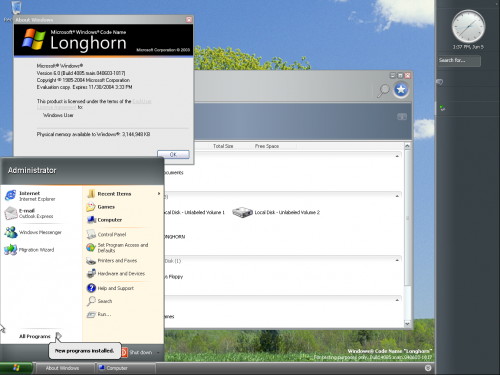 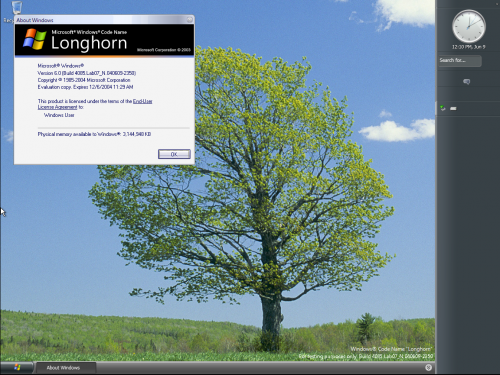 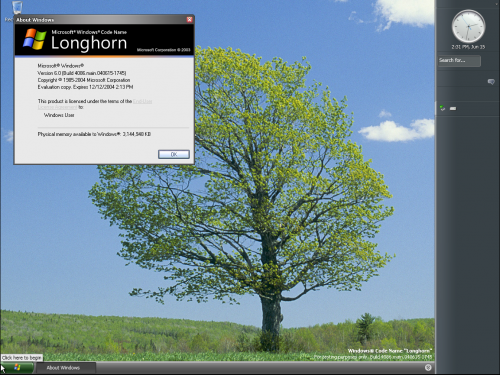 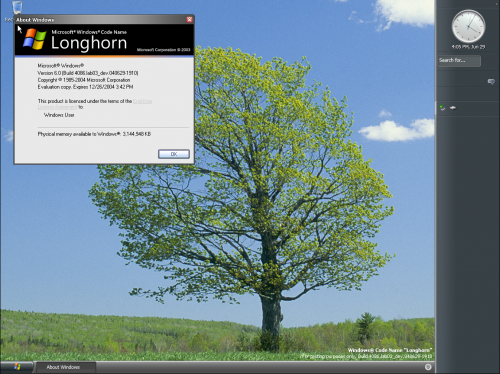 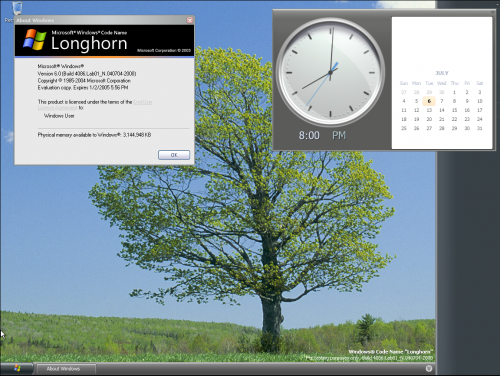 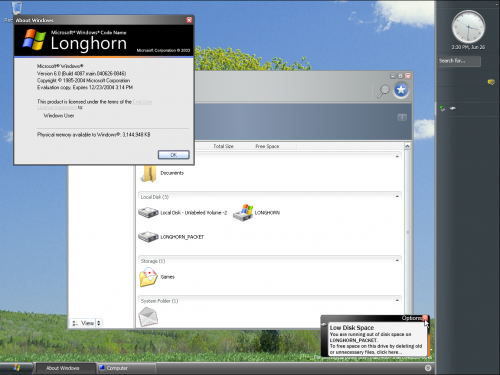 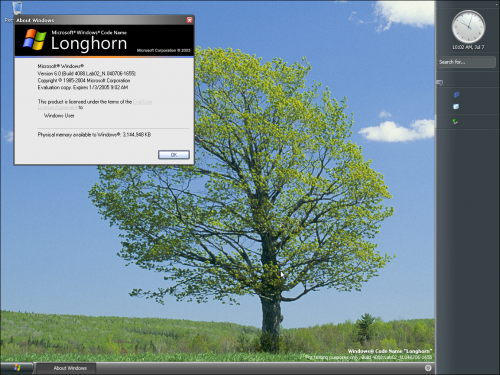 For builds in the 4042 range, I personally recommend to use a SCSI CDROM and harddisk. 4042 has a bug with CDs on IDE (or at least from what I have tried, even on VMware 7.1.4 this bug is present) where it likes to do I/O errors with certain files on a CD. I also found out that LH does not really like the Buslogic SCSI adapter, so I recommend using LSI Logic (VMware claims that Windows XP does not include drivers for that adapter, but LH is based off server 2003 so support is included out of the box). I do not recommend using SCSI for 4074 and beyond. WinFS breaks with certain builds (4093..) only on a SCSI adapter, but not on IDE.

As for the external HDD thing, note that installation will be significantly longer. They're slow, that's all.

Offtopic Comment
Componentized builds take signifcantly longer to install and also a lot more space since they copy their build repository to the hard drive by default.
If anyone needs support with their NT 4.0 systems, I'd be glad to help. Just shoot me a PM.
Previous Projects: Longhorn 4093 Fixing - Exploring Chicago - Windows for Workgroups 3.1, the 286, and NetBEUI.
Top

Thanks for the advice! I will take note of this when installing. However, I'd like to avoid using a lot of disk space if I can. I have 1.2TB free on my harddrive, and I'm going to end up using a lot of it
Also, which 4042 are you talking about? M6 or M7? I've installed the M7 build before.
Top

Both builds are affected by this bug IIRC. Install works fine, but any CD placed after installation experiences this (such as a driver pack or an activation asset).
For disk space, if your work is a PoF and nothing more (you won't install any software or so), then you can get away with using much less space. 4074 and before utilize about 4-6GB depending on the build excluding the page file. A 10GB HDD partition would be more than enough for a minimal configuration. As for componentized builds, the install by default can take up to 8GB without the page file. If your memory size is less than 2GB then you can get away by using a 10GB HDD partition but it would affect stability. 12-15GB is fine.
I suggest larger sizes when dealing with third-party software and customizations only. But since you won't be messing with LH a lot then small sizes are not a big problem.
EDIT: You can use diskpart to partition drives if the setup does not work for you. Just simply use the commands below (make sure you have only 1 disk or you will have to change them a bit). I also recommend using 6.5x-7 compatibility if you face any problems directly related to hardware. LH 4093 likes to hang with no compatibility, but that depends on hardware.

If anyone needs support with their NT 4.0 systems, I'd be glad to help. Just shoot me a PM.
Previous Projects: Longhorn 4093 Fixing - Exploring Chicago - Windows for Workgroups 3.1, the 286, and NetBEUI.
Top

Good to know about the CD issues, I will make a note of that. As for storage space, I won't be installing much extra software because most of it would be broken anyway. Pretty much all I do is patch it up so that I don't have to worry about BIOS dates, reinstalls, etc. As for the numerous partitioning issues, I prefer to just repack the ISO into the Longhorn Packet, which just allows me to do a one-click partition so I don't have to worry about it again. Thanks for the help though, I will try that to see if it is more convenient.
Top

Awesome job putting the time into doing all this. Sorry for "borrowing" your legend idea.
Top

Thank you, it certainly takes a lot of time to do all of this. You do get bored after a while. Totally fine with you "borrowing" my idea.
Top

Oh for sure it does get boring after a while. I just hopped off my Longhorn Pre-Reset project and moved on to Whistler myself. But you got this, don't worry if you need to take a few days off at times to rest, doing this can be time-consuming.
Top
Post Reply
9 posts • Page 1 of 1