I found some strange thing: Windows Vista IA64 debug symbols on official site: https://web.archive.org/web/20110314142 ... e/gg463028. What??? As far as I know Vista never was built for Itanium. Windows Server 2008 was, but Server RTM version corresponds to Vista SP1, not Vista RTM (no SP). Does somebody know anything about this? Maybe it is for some Windows Server beta? I can't find any information on this topic around the Internet.
Top

I see where it mentions Itanium, and where you can get the idea that it was offered, but that is not correct.
It does say each Itanium debug symbol package, yes, but does not explicitly state "Vista IA-64" or the like. In that case it denotes each Itanium symbol package that is available for an IA-64 available OS.

In that case, then, for which OS version are those symbols? Actually, IA64 symbol installers contain word "Vista" in their name, for example, http://msdl.microsoft.com/download/symb ... ymbols.exe.
Top

This is what I get when I run the installer: 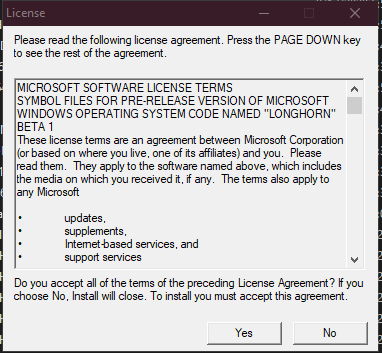 Interesting. One of the problems with this is that the installer runs on x86-64, so I don't know.

EDIT: Looking inside one of the PDB files I find references to ia64 and Vista RTM, so perhaps there was a build of Vista for ia64, at least internally. Example:

I suppose Microsoft was going to release Vista for IA64, but later cancelled it. Or maybe the reason of Vista references inside is a shared codebase of Vista and Windows Server 2008.
Also, I suppose installer runs on x86 because Itanium versions of Windows can run x86 binaries with software emulation - WOW64 for Itanium, something like WOW64 for AArch64 on modern Windows 10 ARM edition, and, perhaps, that's why Microsoft decided to use the least common denominator for architectures - 32-bit x86 for its symbol installers. That's reasonable.
Top

eyesolaris wrote: ↑
Thu Sep 17, 2020 10:52 pm
I suppose Microsoft was going to release Vista for IA64, but later cancelled it. Or maybe the reason of Vista references inside is a shared codebase of Vista and Windows Server 2008.

It's most likely the latter. Windows Server 2008 is essentially the same operating system as Windows Vista Service Pack 1, to the point where both OSes shared the same build numbers and code throughout their development (including after Vista was released, as Srv08 moved on to SP1 builds) and that Srv08 SP2's updates that were released after Vista lost support will still install in Vista SP2 (such as the update that bumps the build number to 6003). The IA-64 symbols for Vista RTM were probably intended for the corresponding Srv08 build (which is unleaked but I'm pretty sure exists) but were mistakenly released as Vista IA-64 symbols

In terms of why Vista never got an IA-64 release, by the time of Vista's release, the computer industry, including Microsoft, had already given up on IA-64 outside of the enterprise server niche it did develop. In fact, Microsoft dropped all support for the IA-64 releases of Windows XP (both the initial release and the one based on Server 2003) in January 5th, 2005, about 2 years before Vista was released to retail.
Do Not Make Illegal Copies Of This Signature.
YouTube | Twitter | BA Wiki | BetaWiki
Top
Post Reply
6 posts • Page 1 of 1