Windows Speech Recognition was a significant feature during the development of "Longhorn" / Vista. For the first time users could control the Windows operating system interface solely by voice. Windows Vista Build 5112.winmain beta1.050720-1600 includes a Speech Center that offers unparalleled levels of customization related to speech commands. As depicted below the Speech Center allowed users to completely disable individual categories of commands. The Speech Center can be accessed by clicking "Enable additional speech functionality" on the "Speech Configuration" option in the context menu of the recognizer. 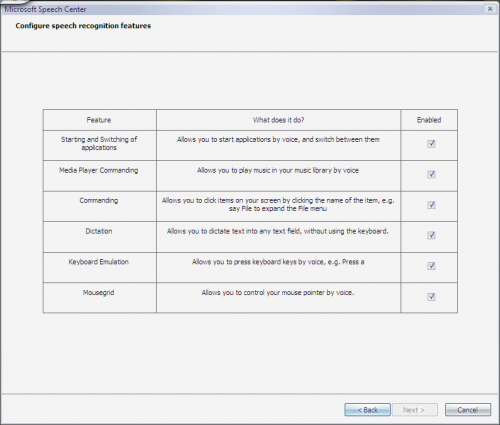 While it might be difficult at first glance to see why one would want to disable commands I think there are several potential benefits:
One might notice in the above screenshot that there is an option to disable (or enable) the Media Player Commanding feature and its associated commands that allow users to "play music in your music library by voice." In Windows Vista 5112.winmain beta1.050720-1600 (but not in Windows Vista RTM without the use of a macro) it is possible to play items from the Windows Media Player music library based on artists, albums, genres, and playlists directly by voice, even when the application itself is not open before the command is issued. Note that this predates Cortana's (recent) ability in Windows 10 to play song's based on artists, albums, genres, and playlists from Groove Music by approximately ten years. 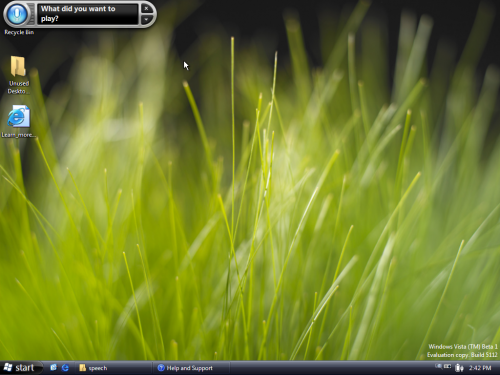 The initial Windows Speech Recognition interface when a command to play an item is issued. 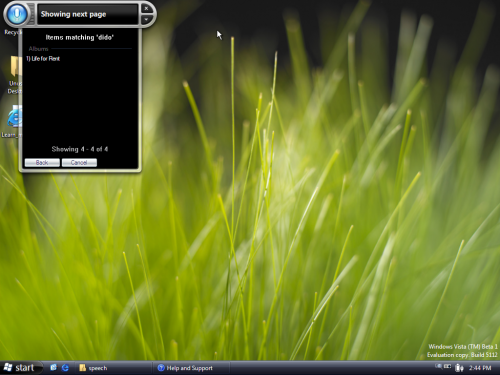 A disambiguation interface for music items was also implemented. In this example the Life for Rent album matches the Dido criteria as she is defined as the artist of that album based on its metadata properties. The above screenshot also illustrates how users could cycle between different pages with different suggestions. 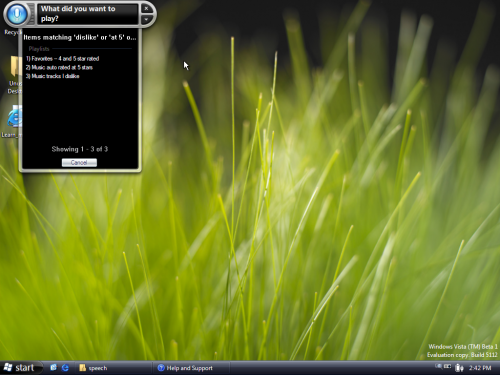 As mentioned before commands were not limited to artists or albums. Users could, for instance, issue a command to play a certain playlist.

The strings of text in SpeechUXRes.dll of Build 5112.winmain beta1.050720-1600 illustrate the following items that could be played: While I did not test in Build 5112, the strings of text in SpeechUXRes.dll indicate that users could also switch between tracks in an album or those that were recently played; pause tracks; and stop tracks: Finally, the strings of text also indicate that users could adjust the volume of speakers to their highest levels; increase or decrease the volume by increments; or mute or unmute speakers solely by voice (note that such speech commands are also not available in Windows Vista RTM without the use of a macro):
"We do not view the desktop as a mode, legacy or otherwise."
Windows Vista: Microsoft Speech Center | Windows Vista Saved Search chronicle
Top
Post Reply
1 post • Page 1 of 1