A channel (Spyonclear), known for his WNR content (I won't talk about WNR on this post) had made an video (Windows History with Never Released Versions, Release 3), with the first version appearing on it being a 'Interface Manager 0.2 alpha' build, most likely from mid-1983! The image seems to not have an interface manager, but a DOS-like UI. I do have the image of the supposed build, although I am not sure if this was already shown in previous posts. I think that this isn't a fake build, and rather a real build.

I need to get 3 approved posts to upload an image, so i will try upload it soon (Maybe you can go to the video and see the image inside of it).
Top

Don't even bother with WNR...
Nerdiest nerd of the FTP Access-only town in Nerdana.

Yeah WRN is all fake. If you want reliable info about known builds and screenshots, Betawiki.net or our very own wiki are the best places to go. YouTube is full of fakes.
I collect old laptops and mess with old software.

Sorry. That was a random video I came across to that had an mixture of that and that, so I couldn't really know what that would be.
Top

Most WNR related stuff is fanmade content. FYI, there is even a WNR wiki, however its important to keep in mind that they are not actual releases.

"Legit" never launched releases of Windows include Cairo, Nashville, Neptune, Oddisey, Blackcomb, Vienna, Windows 10 Mobile RS4, Santorini. Some of them were just planed stages for the Operating System roadmap, with no active development behind them.
Top

Here's the screenshot for anyone's interest. 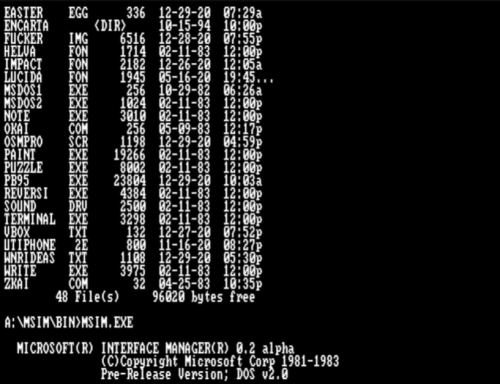 Some file dates are interesting as well as the boot message. There are however many suspicions:
-Why is "Interface Manager" a registered trademark with only a few months of development and not the name of the final product?
-Why is there no MSIM.exe in the directory list? There's no cd command, so it's the same folder.
-Half of the file dates are from 2020, not 1983.
-Why is there a WRITE.EXE? There is nothing even close to that in the Windows 1.0 beta builds we know of.
-DOS 2.0 was released at least a month after the supposed compiling of this build in February 1983.
-The 1983 Windows pre-alpha had a version number of 0.01. How can this be 0.2, being made 7 months earlier?

DiskingRound wrote: ↑
Sun Jan 22, 2023 4:33 am
-Why is "Interface Manager" a registered trademark with only a few months of development and not the name of the final product?

Also, the Interface Manager "registered trademark" never existed in the US Patent and Trademark Office database until 1986 by some company in Atlanta, Georgia.
Top

.EXEs should never be 256 bytes in length. Reversi, Paint and Write didn't exist back them. In 1983 Microsoft used .SYS for drivers and .MOD (or nothing, all statically linked into MSWIN.EXE) for executables, not .DRV and .EXE.
Top