You may remember this thread from a while ago where someone found a copy of 3.1.438 for AXP.

Got lucky and found a DEC Jensen over Christmas and tried to get this one going. For those not aware, the DEC Jensen is an EISA machine and EISA is special in that you have to load a special EISA configuration disk if you want to use any EISA cards kinda like how you have to load a reference diskette when installing new microchannel cards in an IBM PS/2. The only DEC Jensen EISA configuration disk known to still exist is v1.8 on the Internet Archive.

3.1b2 AXP only works with some EISA S3 cards and the Compaq QVision 1024/E video cards, and since they're EISA you of course have to load the EISA configuration disk to get them to work. Here's the problem: I'm pretty sure this build depends on a special prototype firmware as it doesn't appear to load on any newer released firmware - it simply hangs after ntldr completes and passes control over to ntoskrnl. While the correct firmware is included on the CD and can be flashed, the flashing process also wipes NVRAM... which is where the EISA configuration data is stored.

You're probably asking why I don't just boot up v1.8 of the EISA configuration disk and to that I say it's because v1.8 is too new for this old prototype firmware - it simply can't figure out what machine it's running on, so it immediately aborts. I believe you will either have to hack the v1.8 disk to recognize this old firmware, or we'll have to get lucky and also find a prototype EISA configuration disk that matches this firmware.

What's weird is that when the thread was first posted I tried it on my AlphaStation 200 and it would actually boot up past ntldr and get into ntoskrnl without any issue! It just would instantly bugcheck because there are no video drivers for the DEC video card in that machine and there's no compatible HAL.

In short, it is presently not possible to install 438 for Alpha AXP. That's probably not really that bad of a loss, as outside of it being for Alpha AXP the only difference between normal x86 438 is: 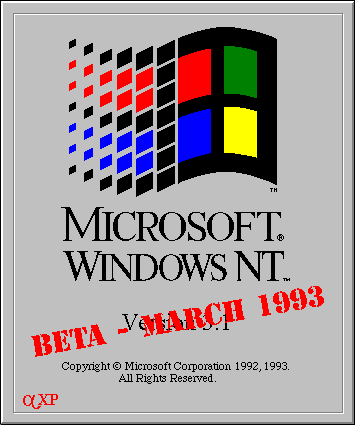 Thanks for the info. Cool piece of history. Any chance you could share the ISO? The person who dumped it never shared it publicly and I would like to archive it.
Top

Can't you just dump the BIOS and NVRAM to backup, then flash the BIOS, compare the reset NVRAM and re-inject EISA data as required?
Top
Post Reply
3 posts • Page 1 of 1