1. Don't post a request if you have under 10 posts as stated in the rules. If you do anyway, it will be deleted without further notice.
2. Requests for anything against our rules will not be entertained and you will be warned.
3. Check that we don't already have the file on our FTP servers by using the database linked in the navigation.
Post Reply
10 posts • Page 1 of 1

A copy of IBM Windows 3.1 mastered from the original diskettes.

Diskette 4 is recreated by adding files to the Windows diskette 4, but the original wreckage is available for inspection.

Printer drivers on diskettes 6 and 7 were not in the purchaced set. 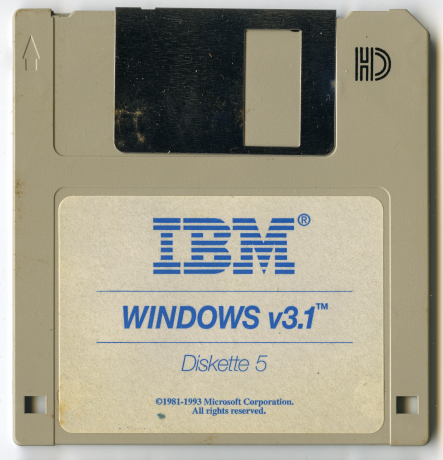 Sample diskette. All five in the file.

It is the link. But i thought it would upload to the open folder, rather than the base.

I fixed it up now. It's called IBMWIN31.ZIP, and is signed by me.
Top

Even though disk 4 is not in a good shape, most critical information survived and it should be possible to restore it manually.

Without knowing the location of damaged sectors, I will have to go through the dump sector by sector and compare each file. Not sure why some broken parts of the files got replaced with spaces (20h).
Top

Looking at the order of the fat, I suspect to delete also mouse.sy_ and add it back into the image. That would create a new FAT chain. It's listed last in the fat. There are 133 sectors broken, in these files:

These files are reported as having different crc's than the original.

The bulk of the broken sectors are in the low cylinders, although there is a bad sector in the high range. (based on the graphic of recdsk.).

I suspect using a file-compare of the fats of a Windows diskette 4, and this one, since it appears that that they first deleted mouse.co_ and mouse.sy_ to make room for mouse.com, but restored mouse.co_ (compressed, as per the reconstructed one), and then mouse.sy_.

It would had been highly unusual for IBM to have used an msdos40 boot sector, when the usual fare was to use IBMDOS 5 boot sectors.
Top

I just restored the disk from what you have provided and is it possible to take a look at it? Download here. Everything done in a hex editor and the image should be original but I make no guarantee.

It would be helpful to provide a screenshot of bad sectors so it is possible to verify the fixed image. The "high range" bad sector contains parts of WINFILE.HLP I think. Some FAT sectors died but FAT is easy to fix so image header is in a good shape. I checked CRCs of files on my fixed disk and all files matches the old IBM OEM folder dump.
Top

The repair looks good. It matches what is already known of the disk.

It may have something to do with the recovery program. Some sectors look faulty, but an image of it was preserved by floprec, while other sectors were 'not found', and floprec placed spaces 0x20 there to keep the spacing. That's how I read. It's too unnatural for sectors parts to be mangled, but complete sectors come to spaces, unless it's because it could not find a sector-header.

I suspect that why i got an array of 0x20 for honey.bmp, is that winimage read the fat, and copied the required location of bytes from the image, the actual sector should have been entirely spaced out.
Top

Actually there's another copy I found on the Internet, it has just MOUSE.CO_ in disk4 different compared with this copy.
https://mega.nz/file/wlhkgTpT#dhYDgF8iS ... 56OcKOqOeI
Top

It has the correct boot sectors. Will run it through the rollers.

The result is that the set matches the IBM set, with the exception of mouse.co_, which is the microsoft version, rather than the ibm version. The balance of the disks match the IBM set. The directory shows no deleted files, and the mouse.co_ and mouse.sy_ at the end. The microsoft release has these files in alpha order in the set, so this is a particular marker.

The file can be corrected with winimage, but then you have to drag mouse.sy_ into the image to correct it. The files and the root directory then agree with the wreckage version.
Top
Post Reply
10 posts • Page 1 of 1