Just in time for the sunsetting of Windows 7, Youtube has started showing banners that they will be disabling the old desktop ui and forcing the updated "polymer" layout in March 2020.

Launched in 2017, the polymer redesign applied Google's "Material Design" language, trading shaded, static elements for blinding white and javascript heavy animations. While it looks slick, the lack of contrast and shading on elements and buttons makes it a little harder to use. It's also slower on low end hardware / internet connections, and quirks in the implementation mean fully HTML5 complaint browsers may not render it correctly.

Even major browsers like Trident Edge and Firefox had issues, and some Microsoft engineers cited polymer as one of the reasons for transitioning Edge from Trident to Chromium.

Internet Explorer, along with other older or obscure browsers that can't render polymer, will be unable to access the site.
Top

I will be off Discord for a week. I will still be on the forums though, so you can always ask me questions via PM.
Top

Windows XP baybeeeeeee!!!!
Chrome49 should handle polymer just fine. It will just be slower/more power consuming (especially on older hardware with weaker graphics chips) and harder to use (especially on not-widescreens thanks to the inflated padding).

It's just a shame because Twitter, Reddit, Deviantart etc. all allow their users to opt out of their redesigns and switch back. The cost of keeping obsoleted layouts available is minimal. If I had to guess what their real motivation is, it's probably to force the last 7%-9% of people using Internet Explorer to Chrome and motivate new pc/chromebook sales.

Google wants to control the browser market so they can push the technologies important to them, and also push Google services and data collection. Chrome encourages users to use Google products, and create a Google account to be tracked by.
Google also doesn't mind obsoleting semi-current devices, since they not only benefit from the sales revenue of new devices, but also from bundling/promoting services with those devices, and from using the extra horsepower in new PCs to do more data collection in the background.
Top

ugh i just experienced this and its the only reason why i updated to EDGE, i mean EDGE on Win7 seems pretty good so far but i have only had it installed for a week

Offtopic Comment
Have you heard about New Moon? Pale Moon?

I will be off Discord for a week. I will still be on the forums though, so you can always ask me questions via PM.
Top

dj_cityboy wrote:ugh i just experienced this and its the only reason why i updated to EDGE, i mean EDGE on Win7 seems pretty good so far but i have only had it installed for a week

The Chromium Edge is not at all bad, I too use it to view websites that only play well on Chrome. Slightly faster than the Google Chrome. And it looks like I may have to use it on Google services now.
I do wish they would've at least tried to bring over Edge's UI style. To me, it looks like any other Chrome clone.

I’d like to have the old Edge Design in the new edge, that’s why I‘ve been using it for about 3 years now.
Top

Oh right, I forgot the devs merged Vista into the XP branch to save on time and cost.

Yes, but besides having compatibility issues on some websites (everyone develops for chrome now)

Polymer is garbage tbh, I preferred Classic.
DV
Go check me out on YouTube!

To be fair, this was only a matter of time. The only real reason why the classic style is still available alongside polymer is, that polymer is still missing certain features (channel page modifications for example). I wonder if these will be implemented into polymer by the time classic gets disabled or if they will just force polymer further and still keep falling back to classic for these features.
Also known as Cvolton elsewhere...
Top

Yes, but besides having compatibility issues on some websites (everyone develops for chrome now) it can't render polymer either and will stop working with Youtube in March also. 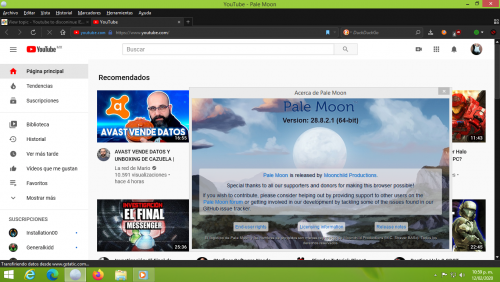 So there you have it, an IE alternative that you can trust.

And maybe some websites get a little picky, but it's mostly due to user agents. If you fake your UA to Chrome, many sites load properly.

The sad thing about this, is that now it's going to be super hard or totally impossible to load YouTube on Windows 98/2000. And all because everyone started using Chrome, a Google browser. Now they control the web, just like Microsoft used to back in the IE days, such a sad thing, such a wish for another anti-trust but against Google.

This is why you should not be using Chrome, neither any Google services.

Windows 2000 with Extended Kernel doesn't have any issues with loading Polymer v1 in New Moon 28/Serpent. But the status of NM26.5 for vanilla win2k is unknown.

My Core Duo T2400 chokes on Polymer though, especially since it runs at 1 GHz most of the time to keep temperatures low. Even at that frequency, I can play 720p videos in WMP9 fine with 30% CPU usage, yet 480p on YouTube is choppy at times. It really angers me to see all that bloat hidden behind a so-called minimalist "material" design.

So I recommend using a front-end like invidio.us, which allows you to easily download videos by right-clicking on them, for playing in a local video player on really old hardware. But it's not much faster than Polymer v1 though.

It's a shame that there is so much Google inertia nowadays. A nasty attribute of being forced to do group projects in school is that the other members usually insist on Google Docs which is also really sluggish compared to my Office 2007. And now I've noticed sites (script-infested ones of course) recommending Google Chrome for the best experience if not forcing it completely.

It's like the early 2000s again when some sites only worked in MSIE and others were littered in "get IE6!" buttons.
What is the name of the application software guaranteed to make your computer faster?

Looks like Opera 42 (Chrome 55) is able to run Polymer. 2016 browser I tell you. Probably shouldn't be using that dated browser either, but whatever.
Google just auto-dumped it on me today with no option to disable.

So that's the low bar so far to me. It's very laggy on a Celeron G4900 playback and general website interaction.

That sounds like a problem with the player. Your graphics adapter probably supports hardware accelerated H264 decoding, but not VP9. I've gotten way improved performance and thermal/power usage by disabling vp9. You can disable it manually in many browsers, conveniently Chrome isn't one of them and requires the use of a 3rd party extension like h264ify.

Weird, that's earlier than they said they would do that.
You can try re-enabling it by adding &f6=8 to your PREF cookie in devtools.

No, I took that screenshot on Pale Moon 28.8.0. I guess they fixed youtube compatibility in a later update. Thanks for correcting me!
Top

Google is still trying to get everyone not using Chrome to use Chrome, they just want to dominate the browser market so they could get more customers and well be more like Microsoft back when Internet Explorer was a thing. And I even used old YouTube because they tried to push a mobile first home screen to desktops and you know, I don't like phones that much.
Top

MrBurgerKing wrote:You can try re-enabling it by adding &f6=8 to your PREF cookie in devtools

Thanks I'll give it a try. Want to keep using the old youtube as long as I can. Don't exactly have the money on hand to leave that Celeron.

There's no little message or anything. I just have Polymer and I hate it. Mass clutter and disarray. With ads taking up a grand quarter of the screen. And then everything is super enlarged. I mean it's great for me with bad eyesight but the Zoom function of the browser scaled better.
You'd think with big €€€ Google could do better. But no.
Then either you have blinding white or switch to "Dark Mode" where the greys are so close to each other they blend in.

You will never tear me from the grasp of the Pentium M!
Top
Post Reply
17 posts • Page 1 of 1