Now, WinXP won't be getting updates anymore.
Today, on April 9th 2019, Windows POSReady 2009 ended support.
I speak Russian as my main language, so excuse me for the grammar mistakes I make.
I love collecting rare Windows/just Windows releases/betas. Some rare versions not on old-dos will be reuploaded there
Top

Now all editions of Windows XP are unsupported. Farewell Windows XP and Embedded versions 2001-2019
Windows 7's end support is on January 14, 2020! It's time upgrade to Windows 10! Windows 8.1 also is supported but not Windows 8!

Caveria wrote:I found BetaArchive, because I tried to get beta versions of Windows.

Windows XP based OSes are the best.

And now begins the era of unofficial updates for NT5.1. Not that it hadn't already begun several years ago - there's been attempts at porting DirectX 10 to XP, There's been 4GB PAE extension mods to make XP support more than 4GB of RAM. There have been various modifications of the OS over the years that patched core system files' resources, extending API's, etc. Seeing as 2000 has extended kernels that actually provide NT5.1-6.0 functions to support newer software, it's entirely in the realm of possibility that XP will get the same treatment. Keeping XP alive well beyond its intended use case is something that will extend well beyond its usability phase - we're already about 13 years out from that, at this point.

First things first, we're going to want backported CVE security fixes. I'm relatively certain that there's got to be at least one person already planning on this.
Secondly, the 'enhancements' - We've had UI enhancements over the years, unofficial themes, directX 10 backported (albeit not exactly useful for much), wineD3D for directX 7-11 (https://fdossena.com/?p=wined3d/index.frag), and many other enhancements.
Third, whatever else floats one's boat. NT 5.1 ran on so many different types of systems, there's drivers for practically everything. Even in its official end of support, it will continue being used in niche hardware and software. Keeping it around for years beyond the initial scope of use is something we do here for every OS we've ever encountered!
Need disks scanned in the USA? I have a Kryoflux, and am willing to help get your disks archived! I also offer xbox and xbox 360 repair and modding services. PM me for details!
Top

I've used Windows XP for a long time, it was fast, secure and stable. The spirit of NT5.1 shall never die. It is the inspiration of better versions of Windows and we should not forget our friend who helped us to get through all the hard work and provide us with entertainment (yes, play minesweeper in office secretly*hehe* ).
Top

I remember my XP machine. It was super slow, and I figured out why. My processor was on power saving mode so it was running at 800 MHz instead of 2.8 GHz. Then the power supply blew and it got thrown out.
DV
Go check me out on YouTube!

I won't get into the whole debate over if you should continue to use any XP variant now that it's unsupported (if you've known me for a while you already know my opinion on this matter), but still.

It feels quite... surreal knowing that XP, which was supported for longer than some people on this website has been ALIVE for, has finally bit the dust for good. Like if XP was a person, it would be a junior in HIGH SCHOOL. That's how long MS ultimately kept it alive.

But, I think the big question is Windows Update. Microsoft is apparently gonna require SHA-2 encryption for Windows Update starting on July 16th for Windows 7+. I wouldn't be surprised if MS also uses that date to finally discontinue the web based Windows Update and maybe even updates for Windows Vista too, as Vista uses basically the same WU client as Windows 7+ but IIRC never received an SHA-2 update, so... if you are still using 2000, XP, or Vista and do not want to bother with the somewhat confusing Unofficial Updates and Service Packs out there (at least, that was my experience the last time I tried them out for 2000 a few years back, your results may vary), I think it's a good idea to do a Windows Update run ASAP before MS pulls the plug for good.
Do Not Make Illegal Copies Of This Signature.
YouTube | Twitter | BA Wiki | BetaWiki
Top

Today is a sad day, but without xp, windows 7 and above might not have been the same.
What's makes old versions of windows so interesting and fun to try nowadays? Nostalgia! Also, Windows 7 Is Ending Support 2020!

It's over. It is completely over now. We can all thank Windows XP-based versions for staying alive for nearly 18 years.

It's all over now. Sleep tight, XP.

XP was awesome OS. But its not dead yet

Still many of us have XP boxes

wow. I was actually gonna install POSready on my old laptop to keep it safe... it's sad to think the last XP-based kernel has fallen out of security. R.I.P XP
Top

I knew this day was to come...
And next year ends Win7 support...

Almost 18 years later, and XP still refuses to die. Some market share estimates place it higher than 8 and Vista.
Bear in mind how long ago 2001 was. Pentium 4/Athlon XPs had just launched. Computers were still beige. Frosted tips and shiny pants were cool. Disposable cameras, CDs, and payphones were still a thing. Smartphones were still science fiction.
It's honestly surreal how long-lived and rock solid it's been.
Top

You can still get winxp for virtual machines. Or have they killed that, too.
Top

Also, it's been 5 years since the main version of Windows XP ended support.
Michael Jackson (1958-forever)
Windows 7 (2009-forever)
Legends don't rest in peace, they rest in power! But when abbreviated, it's still R.I.P.
Long live my legends!
Top

Funny thing, I never liked XP too much. Compared to Win2000 it felt like bloatware.
XP was the reason why 2000 became outdated too soon: I haven't forgiven that yet.
Top

People, Microsoft Windows XP in every way was finally killed. And so did a lot of amazing memories with it. Many people have used Windows XP on any computer they've had, it had a lot of cool improvements and features, and was also a bright example of computing made enjoyable. It still surprises me that even 5 years after killing the standard Windows XP, companies that needed a backend for special needs (Windows Embedded 2009) had more support and (maybe) time to upgrade their systems to the latest technologies. Lots of people will miss the lots of hours in front of Windows XP doing their work, doing amazing creations, and more.

We love you XP. Stay safe in the afterpower.
"It is now safe to turn off your computer."
Alejandro J. Herrera Barboza, 16, from Costa Rica
Top

superlions16 wrote:LOL, strongly agree. I don't even care if an OS ends support, as long as it supports things I do.

It should be clear. Windows XP isn't abandonware if it is supported by the community, by the people that can make it better. We can keep bringing Windows XP the love it deserves even if it isn't patched any longer!

The question is, when we clean install a Windows XP or POSReady 09 on a machine then open Windows Update page in IE, after scanning for updates, it would ask us to jump to a web address where can verify our Windows copies are genuine. However, that address has been offline by Microsoft forever, make verify impossible. So we cannot recieve any updates, even function update (.NET, Windows Search, WMP11, etc.) via web update. The only thing we can do is to wait until a WU message pop up in taskbar and install security update.
Top

Good riddance.
Windows Defender for great justice! Bugs are an international trading company. I need to defeat the anti-debugging and obfuscation methods. It wasn't for Intel's absurd ability to load in ie6. Why even waste time with people in an envelope?
Top

Sweet! Now we just need to wait for Windows XP and all of its editions to become unpopular so that they can fully become abandonware. People just can't get over XP, LOL.
[TUT] Install Windows Whistler without setting BIOS date

RIP XP. Windows XP was my childhood OS (I was born in 1999), and is my favourite. I've got XP running on an older tower and laptop (Inspiron 6400), mostly for running older software, and nostalgia. My high school had computers using XP in it's main computer lab and library until around 2015 or 2016 I think, before everything was 7. Now I think it's all 8.x or 10, not sure though. XP may not be supported by Microsoft anymore, but it will always be supported by us in our hearts.


WindowsNeptune wrote:The question is, when we clean install a Windows XP or POSReady 09 on a machine then open Windows Update page in IE, after scanning for updates, it would ask us to jump to a web address where can verify our Windows copies are genuine. However, that address has been offline by Microsoft forever, make verify impossible. So we cannot recieve any updates, even function update (.NET, Windows Search, WMP11, etc.) via web update. The only thing we can do is to wait until a WU message pop up in taskbar and install security update. 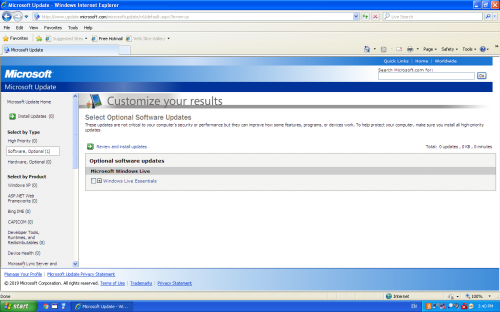 It's not good. For a lot of people, it will never be good. It will be a huge unforgettable tragedy.
Alejandro J. Herrera Barboza, 16, from Costa Rica
Top
Post Reply
32 posts