by ComputerHunter
I was cleaning up one of my old HDDs and found some documents from Ray Ozzie. I found the Windows 1.0 Press Kit and Ray's Meeting Notes originally shared here. Windows 1.0 Press Kit is on the FTP already but as far as I know only some fragments from the original meeting notes PDF survived. I am not sure where I got the notes from but I know for sure it is not the original PDF. I also have the Windows Hello Application Collection originally shared here (from jagoto).

The meeting notes contains notes from 3 meetings, from mid-January, early-April and mid-November 1985. It mentioned various betas of Windows 1.0 and some internal plans. It mentioned an April beta that was planned to be released on the 22nd (originally 15th), a fully functional June beta, Windows 1.00 and Windows 1.10 to be released roughly six months after 1.01. It also mentioned applications such as Alarm, Rolodex, Appointment Scheduler and Glass TTY. The RTM was planned to be released in June on 4 disks plus 2 toolkit disks, packaged in the same way as the April beta. ISVs must modify INSTALL.DAT to make its own application the shell for the April beta. Beta Release does support the use of INSTALL.DAT but Setup works without it. Steve Wood said the DMAADDR problem is a Windows crock and will disappear in the April beta (and it was indeed removed prior to Beta Release).

Here is the full Windows Wish List page from 13th of January: 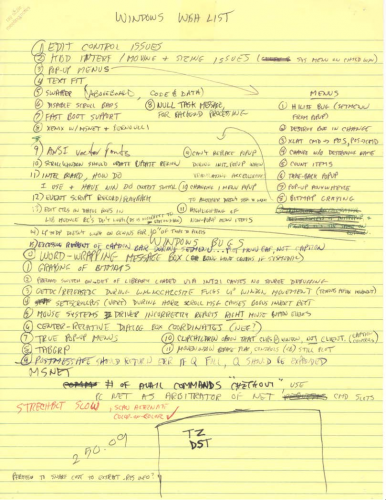