by os2fan2
I collected all of the known PC-DOS 7.10 versions, and the PC-DOS 2000 files distributed with these, along with a scattering of sgkt files.

The PDF file in the release is mostly copied from the sgkt documentation, I have added in additional commands from PC-DOS 7.10 (not in PCDOS 2000 docs), and a utility for writing boot-sectors (from a thinkpad restore disk).

There is no 'install'. Instead, one has to create the disk from scratch, in much the same way that IBM and symentec do. 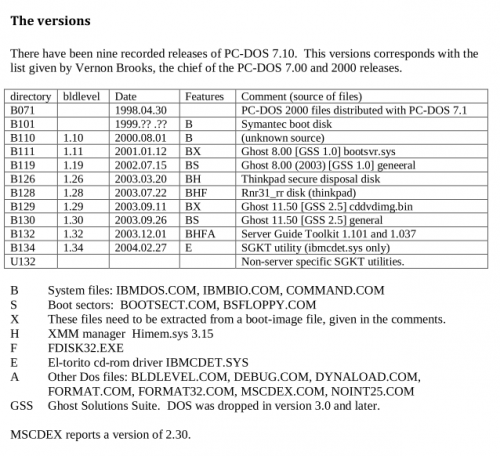 by backtofuture
I have a much older cd version 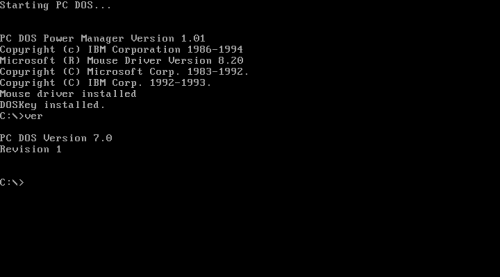 The present DOS says 'version 7.10' when it starts up, and command.com says '7.10'. The revision number is in ibmbio.com, which we're not loading here. This is just a directory full of command.com, designed to test if some batch will work in msdos 6.22 or pcdos 7.10 or whatever.

If it's dated 1996, it was dated incorrectly by whoever ripped the CD. The actual date should be April 30, 1998, just like the floppy version.

that's what I don't understand ...
is a version taken right on FTP
the files are dated 1996

In either case, this is not version 7,10, the command.com of which gives the version shown in my previous post.

As regards build 1.16, it looks pretty consistant with builds at this time. It will boot from a cdrom, but the functionality of BOOT_HD_.NOZ is not there yet. This is the press-to-continue block file in the same vein as microsoft's JO.SYS. If it is a norton package, then i should not be supprised that this is all that they're is.

I've looked through my 'ghost' collection, and while i did not see it, there are large fragments missing such as Ghost Solutions 1 and 1.1, as well as ghost 6 and 7.