I suppose the system is so buggy it even fails to display that messagebox every time. Or maybe it's only meant to be shown in certain circumstances which don't happen most of the time?

Though what I noticed during my experiments is that often it will leave you with the wait cursor and you can still move the mouse, so you might think it's frozen but it actually isn't. It still registers key presses etc., but it gets stuck in some odd situation trying to run a program.
All roads lead to Neptune™

Nice. Did you take any screenshot or any other information? I tried, but it just glitches out and beeps without anything interesting. And I think I've already had that dialog as well. Nothing too interesting.

I've also figured out why notepad won't work in certain configurations (described here, among other places). It appears that on most DOS releases, the presence of USER.PRO in WINDOWS\TEST causes NOTEPAD.EXE to either leave you with an hourglass cursor (the situation I described above) or hang the system entirely. The only DOS (out of more than 10 I tried) which doesn't cause this is AT&T's DOS 2.11. However, if you use that, time related features (including Clock) won't work.

The solution is to either rename, move or delete USER.PRO from the folder. It doesn't seem this is caused by any particular line inside, as notepad will hang even with a dummy USER.PRO present. My guess is that if Windows finds USER.PRO in the \TEST folder, it will load config from it and perform appropriate adjustments internally, and those are what breaks notepad. Deleting USER.PRO after Windows has already loaded doesn't fix the issue, likewise it doesn't bring it back if you copy USER.PRO back to \TEST within Windows.

So if you want both Clock and Notepad to work, use a DOS other than the AT&T one and take care of USER.PRO. This doesn't fix the issue where notepad (and also the control panel) will only start once per session, just the bug/whatever that prevents you from using it at all.
All roads lead to Neptune™

DiskingRound wrote:Nice. Did you take any screenshot or any other information?

No, I stupidly restarted x86box because I had read Overdoze's message only superficially, so I had no idea that crash message was something especially interesting, and so hard to replicate

I thought there may be a way to get hold of BOX.CUR. I tried messing around in the GRAPH but found nothing.

As for the message box. I tried several things to attempt the message to appear:
-Opening various applications including ICONEDIT and FONTDEMO, then trying to open the GRAPH
-Opening various instances of the GRAPH
-Spam clicking (anywhere) allot in a short period of time will eventually cause the system to crash
In my configuration, the system glitches, beeps, and crashes. No message box though.
There are also an hIconWarn and an hIconErr. Maybe the Warn is the music and Err is the bomb?

Offtopic Comment
BTW, ICONEDIT has a gorgeous icon. It's my all-time favorite icon in all of DR5. Reminds me of Nick Jr intro back in the day.
EDIT: Just got this window to appear:

Yeah, I got that once when I was trying to get Notepad to work.

EDIT: I should also point out that TYPE.EXE is in fact the text viewer app which is set to open every file aside from programs. And if you look back at some photos of early builds around COMDEX time, you'll see an app/window with the same icon and name in the titlebar - Text. So I think TYPE.EXE is the leftover of that early app. Of course that one had menu options for editing, which text doesn't as it's only a simple viewer (like its name suggests). Perhaps when they went about redesigning the app menus they split the editing functionality into a sepparate app which became Notepad. Or Text is in fact Notepad and TYPE was made later and simply reused the old icon.

More about the error icon: as you can in this disk error dialog or in the "file too large" dialog in Notepad, there is no icon used, despite both clearly being error messages. So maybe there was no error icon, at least in DR5.
All roads lead to Neptune™

Overdoze wrote:More about the error icon: as you can in this disk error dialog or in the "file too large" dialog in Notepad, there is no icon used, despite both clearly being error messages. So maybe there was no error icon, at least in DR5.

The error icon exists because WINDOWS.EXE has a handle for it (see WINDOWS.MAP). However, when the only API documentation we have are a few samples and includes, it's unclear how to use it (or if it can be used at all, with this incomplete API).
Top

Perhaps the bomb is just an easter egg, and it is never used... or more likely, maybe it is a left-over from an earlier pre-alpha that did crash like that. We know the trash and up arrow are remnants from earlier Windows versions, so why not the bomb? I would not be surprised if all three (+ the upper menu) were sacrificed due to legal problems with Apple... 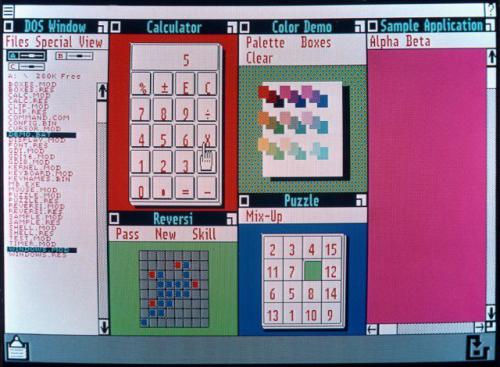 The Tandy release looks to me very much like that April 1984 windows beta, except the April 1984 windows beta just showed the date in the top left corner, this one has a menu, but then that's likely what the menu does. Also the lower resolution screenshot we also have of this build from the Bill Gates press release also has that little trash icon. Because the April 1984 image does not show the bar we don't know if that has it too. But it is not in the 1983 builds. This means that the trash was likely used throughout 1984 like Overdoze said, but then it was removed.

DiskingRound wrote:The Tandy release looks to me very much like that April 1984 windows beta, except the April 1984 windows beta just showed the date in the top left corner, this one has a menu, but then that's likely what the menu does. Also the lower resolution screenshot we also have of this build from the Bill Gates press release also has that little trash icon. Because the April 1984 image does not show the bar we don't know if that has it too. But it is not in the 1983 builds. This means that the trash was likely used throughout 1984 like Overdoze said, but then it was removed.

Actually, the left side of that April build screen is cut off (just like the bottom), so we don't know for sure what's there in the status bar. However, since we see the help button is on the right (like in the Tandy build), and the format of the time and date displayed is the same as in the COMDEX build, it's pretty safe to assume that the menu button was moved to the left. Just like it is there in Tandy build.

Also note that the two Tandy photos depict different builds. The one johnlemon647 posted here is the earlier one, it still has the status bar at the top and the text in Calculator buttons is touching the bottom of said buttons. The other one doesn't have the status bar anymore and Calculator button text sits higher. Both of those things match with DR5. And yeah, they are certainly both later builds than that April (or March, more likely) build for obvious reasons.
All roads lead to Neptune™ 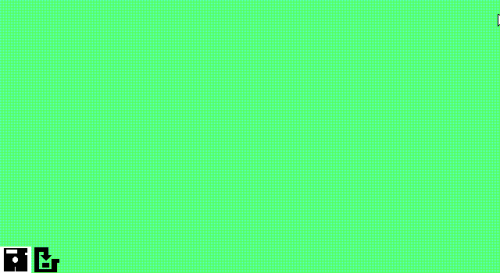 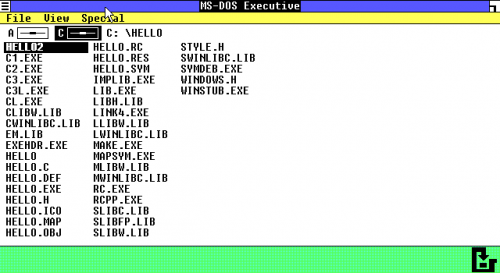 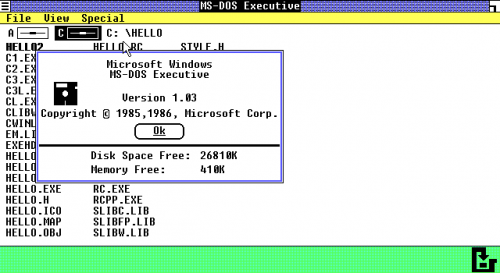 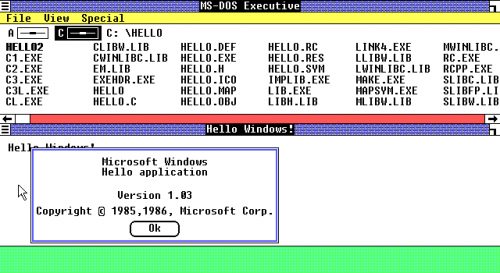 Just a bit of a tip for anyone who's had the same Notepad hang issues on DR5: add FILES=30 and BUFFERS=30 to your CONFIG.SYS file and the issue will be solved - there is no need to get rid of USER.PRO in this case.
All roads lead to Neptune™

I wrote an IDA loader for DR5 binaries to make it easier to play with them and maybe try discover hidden gems: 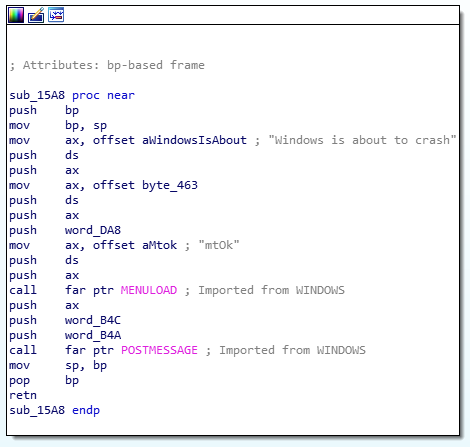 I am happy to disassemble DR5 binaries but I never used IDA before, so I don't know how to add a python script in. Adding it as a script doesn't work.
Top

jagotu wrote:I wrote an IDA loader for DR5 binaries to make it easier to play with them and maybe try discover hidden gems:

Cool stuff, I'll have to try this out. Thanks.

All roads lead to Neptune™

Is my disassembled MSDOS.EXE right? https://pastebin.com/MxJ9B0tf
It seems to be terribly wrong and I found no difference using the loader. What options did you use?
The last part of the string table looks wrong as well.
https://pastebin.com/Le6JnxWk

You obviously didn't use the loader at all. There are no options you have to set to get a proper dissasembly when using the loader.

I don't think I have the DR5ResX anymore, but it should be fairly easy to rewrite in python or something.
Windows TEN - Totally Erroneous Numbering
Always watching you...
Top

I've made a simple and quick tool for converting icons between the old and new format. Source is on github here.

Nice, I've got it. It is not C:\Program Files\IDA 7.0\loaders\ne.dll, choose the Bare DR5 executable. I always thought NE is the one I should use.
Top

I don't get the option to choose when I launch IDA, ComputerHunter, are you using free or pro? I can only have the Binary option even after I copied dr5.py to the loaders folder.

I want DR5ResX as well, jagotu, can you please write it again?

Overdoze, can I ask for a compiled version of your program? I don't have VS 2017 and I can't compile it. It would be good if you can just put it up on your GitHub page rather than making users to download a 2GB program to compile 1 app.
Top

Sure, here it is.
All roads lead to Neptune™

I noticed I never properly documented where the bomb icon is used.

The DR5 API has a PostError function:

And the second paramater can have the following values:

The included apps only ever use a WARNING, but when you use MINOR_ERROR, the bomb icon is used instead of the note icon. And when you use FATAL_ERROR, Windows exits.

I knew about this for a while, but I decided to write a simple app to allow you to see for yourself: 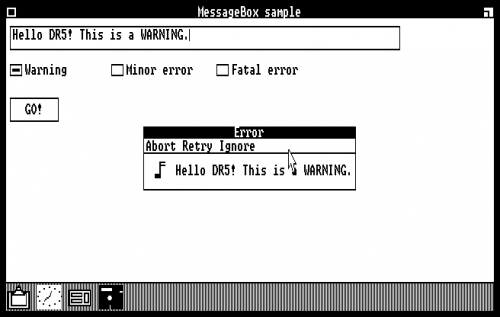 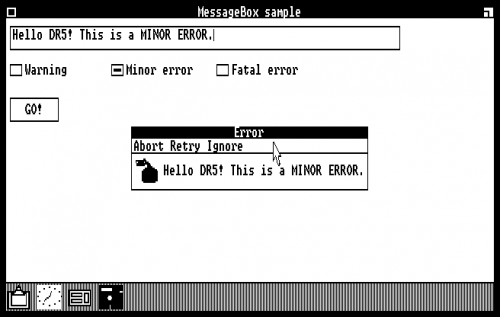 You can download a floppy containing the executable and also the source code (to be compiled with this toolchain: https://www.betaarchive.com/forum/viewt ... 59&t=37194) here:

I'll try this when I can.
All roads lead to Neptune™