Installing Nashville on Microsoft Virtual PC as a full build

Installing Nashville on Microsoft Virtual PC as a full build

After much trial and error, i finally figured out how to install Windows Nashville as a full build on Microsoft Virtual PC 2007. Here's what you need:

First of all, Why do we need to have one of those Windows 95 builds? Well these builds are upgrade builds, like nashville, but you can just continue to install them as a full build anyway. How? Through a file called complinc.dll. Take this file from the WIN95 Directory on the 95 beta iso, inside the Precopy1(Or 2).CAB file, and put it in the WIN95 Directory on the Nashville iso.

Now you need to patch some files. Windows Nashville won't work on today's processors. Look here. These files (Except for CS3KIT.EXE, which is not included) are found in the WIN95 folder on the Nashville iso inside .cab files that start with WIN95_. You can use 7-zip or the file manager of your choice to extract them. After you extracted and patched these files, put them into the Nashville WIN95 directory mentioned before.

Now to install it! As said before, being a upgrade build it asks for an existing Windows Installation. But since we replaced the complinc.dll file with the one from the 95 beta, we can install it as a full build by just clicking continue 3 times. After that, just install it as you normally would do with Windows 95. Up to the second phase, where you get a BSOD like this: 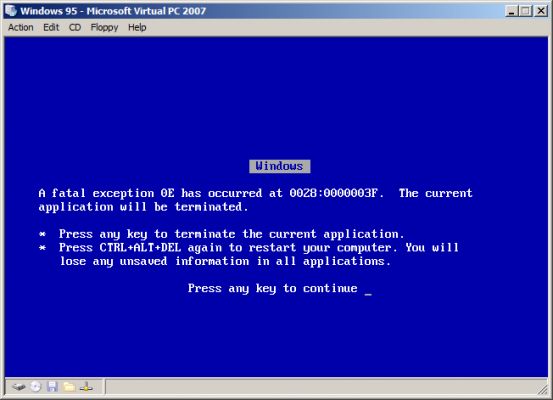 After it boots back into the second phase, don't wait for the BSOD to show up again! Immediately press ctrl+alt+del again to bring up the task manager. Don't worry, the task manager stops the device detection. Press shut down. while the computer is shutting down, it may appear to have stopped completely. Just press enter and the vm will shut down completely.

After that, boot up the vm again, and the second phase of the setup will continue as normal. Then after that, you will land at the desktop! Congrats! Windows Nashville is installed on Microsoft Virtual PC 2007!

Re: Installing Nashville on Microsoft Virtual PC as a full build