Windows 10 Build 14931 for PC has been released to Insiders in the Fast ring. Due to bugs found in the previous build, there is no Mobile build being released.

• While using Narrator and Groove Music, if you navigate to the progress bar while a song is playing then Narrator will continually speak the progress of the song e.g. update with the current time of the progress bar every second. The result is you will be unable to listen to the song or hear any other control you navigate to.
• Oracle VM VirtualBox will crash on launch after upgrading to this build.
• Optional components may not work after upgrading to this build. To get it working again, go to “Turn Windows features on or off”, scroll down and check the right optional component and click ok.  After a reboot, the optional component will be enabled again.
• For keyboard users, using tab to navigate the Settings app will not work in this build. The arrow keys should work as a temporary workaround.
• Tencent apps and games will cause your PC to bugcheck (bluescreen).

Reasoning behind not releasing a Mobile build:

We are continuing to investigate two issues that came up with last week’s flight of Build 14926 for Mobile. After upgrading to Build 14926, some Insiders reported that the pin pad is no longer visible to unlock their phone even after rebooting the phone and some phones lost the ability to use their SIM card. In both cases, a hard reset of resolves the issue. Based on the feedback we received from Insiders, we have decided not to release a new Mobile build this week until we get fixes for these two issues.

I wanted to say Downloading now but since i disabled telemetry on W10, i get no builds as of June 2016. So I let others say something about it.
S.A. 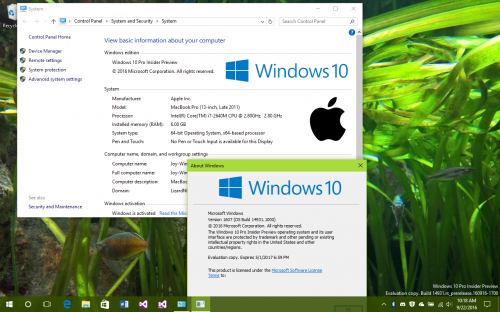