Not sure if this was posted already, but you can easily achieve the same result as seen in that build 34 video of having SYSLOGO.RLE as the bootscreen in build 58s. First you get rid of LOGO.SYS in the root of the C: drive, then you replace WIN.COM in C:\<chicago install dir> with the one you create from SYSLOGO.RLE and WIN.CNF from build 58s, and VGALOGO.LGO from WfW 3.1x. This is the same thing setup does in Windows before 95, by the way.

With that done, you get this: 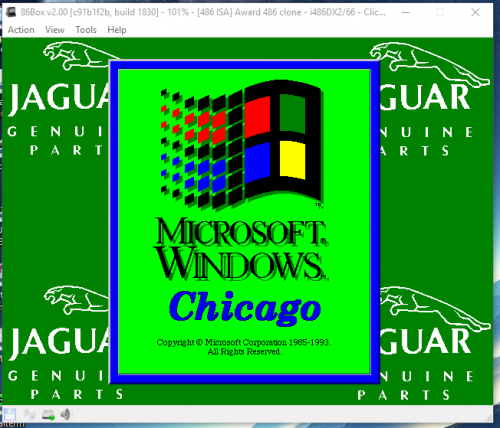 No animation, just static bootscreen like it was in Windows 3.x. Why would this be useful? Well it's probably how the bootscreen was assembled in builds that still used SYSLOGO.RLE, I guess that was later dropped in favour of just WIN.CNF renamed to WIN.COM during setup and the bootscreen itself being relocated to LOGO.SYS with fancy animations added.

Perhaps it's also worth saying that in the future when we see screenshots or videos of builds using such bootscreens, that's not definitive proof that the builds in question are authentic, considering how easy it is to reproduce this with easily accessible files.
All roads lead to Neptune™

Hopefully we find the real build 34 soon... half of it is in the 58s disk already... I set it up but it never finished but it booted to windows but it gave me a "Windows not completely set up" error box...
DV
Go check me out on YouTube!

I went a bit further with this and I managed to reproduce every visible difference from 58s I could spot in the video, except for the icons on the desktop. It may seem silly, but Cabinet in 58s is actually so buggy it keeps rearranging the icons on its own, even stacking them on top of eachother, so it seems impossible to achieve the desktop icons arrangement seen in the video.
All roads lead to Neptune™

The build 34 video for reference, was posted in 2012 by George Wolfowitz, who has since disappeared:

I wonder, has anyone figured out where that peculiar "Jaguar Genuine Parts" background came from how it ended up in a pre-release version of Windows to begin with?

Sure, one could speculate that the software engineer responsible for this had the nerve to run a pre-alpha (at best) version of Windows on what could have been his work machine, but... it still piques my interest on how it got there.
86Box Staff/Power User & YouTube Channel Manager
Now known as DDX(official) on most places on the Internet.
Top

Jaguar was the codename for the real mode DOS 7 kernel upon which Chicago was built. So it's just a reference to the car manufacturer of the same name, a pun of sorts.
All roads lead to Neptune™

DJ Deedahx wrote:I wonder, has anyone figured out where that peculiar "Jaguar Genuine Parts" background came from how it ended up in a pre-release version of Windows to begin with?

Jaguar (as in the big cat, not the car) was the DOS component of Chicago. I suppose the background is a little play on the name. There also was Cougar, which, roughly said, was the Windows part, and Stimpy, which was the user interface.


DJ Deedahx wrote:Sure, one could speculate that the software engineer responsible for this had the nerve to run a pre-alpha (at best) version of Windows on what could have been his work machine, but... it still piques my interest on how it got there.

This is called self-hosting or dogfood. Not sure to which degree did the Chicago team self-host and when did Chicago become self-hosting, but this is common practice in Microsoft.
AlphaBeta, stop brainwashing me immediately!

I seperated the two parts in my bitmap project. The background is not tiled, although close. My version is a tile.
Top
Post Reply
8 posts • Page 1 of 1