Hi, I recently found a computer with Windows 1.00 installed and I am unsure that it is real or not, so I copied all the files from that disk to my Windows 10 laptop and created a VM. Here is a screenshot: 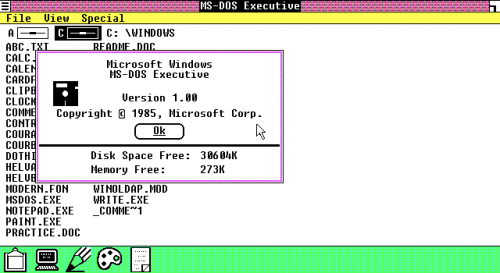 It also has MS-DOS 3.30, softwares such as Norton Commander and loads of old games. If anybody want to take a look at those files, I will upload them to MEGA.

I have my doubts, based on all the fake 1.00s we've seen so far, but it never hurts to take a look and make sure. So please upload this if possible.
All roads lead to Neptune™

But, it's still very interesting !

Hope this is not yet one of his fakes, again...

Can you give us a photo of the computer that runs it? thanks in advance
I'm gonna make him an [OFFER] he can't refuse.
Top

What is the computer? Maybe Microsoft released Windows Premiere Edition (the pre-release) to some OEM as 1.00?
Top

@Pluto950 It will be impossible to have a picture of that computer as I found it in a computer recycle center, I was looking for a computer to take home and found the one with Windows 1.00. I only copied the disk and left the computer there to be recycled (as it is way too old).
Top

Sorry I can't upload the files now as I am comparing those files with Windows 1.0 PE and Windows 1.01. What I found interesting is that in the directory C:\DEMO, there were 7 files: A01.PIC, A02.PIC, CALENDAR.TXT, DEMO.EXE, DEMO02.PIC, DEMO03.PIC AND TEXT.TXT.

BTW, The text file is the famous heuristic reasoning file and all other files were unreadable. I bet those files are for older betas as Windows 1.00 can't even open them except for TEXT.TXT and DEMO.EXE shows an error message saying DEMO.ICO Missing.
Last edited by ComputerHunter on Sat Nov 10, 2018 10:20 am, edited 1 time in total.
Top

@Battler Very hard, I first booted into a MS-DOS 3.30 floppy drive and it took me a long time for the computer to recognize the floppy because the computer was a bit broken!
Then I removed read-only, system and hidden attributes from COMMAND.COM, CONFIG.SYS, IO.SYS, IBMBIO.COM, BMDOS.COM and MSDOS.SYS, I copied all the files from C drive to my floppy and it was full. I used 6 floppy drives, copied all files from C:\DOS, C:\DEMO, C:\SGAMES and C:\WINDOWS to those floppy drives as they are too big to fit on a standard one.
It took me a long time to get those stupid files from the floppy to my Windows 10 laptop, I first put those files onto an old XP computer, put all those files together, put them into their original directories then put them onto a disc.
Finally, I put the disk on my Windows 10 laptop and put all those file on it.

Not necessarily. File dates can be altered during certain file operations. The best way to know for sure would be to do a binary comparison with all the leaked builds.
All roads lead to Neptune™

BTW, The text file is the famous heuristic reasoning file and all other files were unreadable. I bet those files are for older betas as Windows 1.00 can't even open them except for TEXT.TXT and DEMO.EXE shows an error message saying DEMO.ICO Missing.

You copied ALL the hard drive, I hope ?

Not to mention, what exactly stops him from RAR'ing up all the files, putting the RAR to upload, and in the mean time, comparing the non-RAR'ed copy of the files?
Join [url=irc://irc.ringoflightning.net/softhistory/]#softhistory @ RoL IRC[/url], a nice community for true enthusiasts!
Anime channel: [url=irc://irc.ringoflightning.net/aniboshi/]#doki-doki @ RoL IRC[/url], Mibbit, KiwiIRC.
The 86Box help channel is #softhistory now!

Yes, confirmed fake, all the files in the Windows directory are modified versions of Windows 1.01. It has Norton Commander 2.01, from 1988/09/16 (confirmed real). I am not going to verify those games as they are probably real and I haven't herd of most of it. I think those demo files are real as well because of the heuristic reasoning file. The only thing that is fake is Windows.
@Battler, I didn't upload it because I started to think it is fake and don't want to upload a fake copy, I could upload the Norton Commander if you want.
Top

And upload Demo files too, please !

It is important to recover files, too long lost, unfortunately... Since the time... !

@Jajan131, Here you go:
https://mega.nz/#!ocU0RABS!TVAutJOWITgm ... OrSvieiOpk
I don't think those files are that important, all 4 pictures doesn't open, DEMO02 and DEMO03 have the same size as A02, so they might be just 1 picture and sadly, they were all made up of empty bytes (Seems like it has been wiped or there is a disk corruption), the text file is the heuristic reasoning file, half of it is gone (zeroed), but still recognizable. The DEMO.EXE for whatever reason doesn't work and I am pretty sure that they are from Windows 1.0 demos back in 1984.

@Battler, the Norton Commander is on the BA ftp https://www.betaarchive.com/database/vi ... f45b6c3f43, so no need to upload.
Top 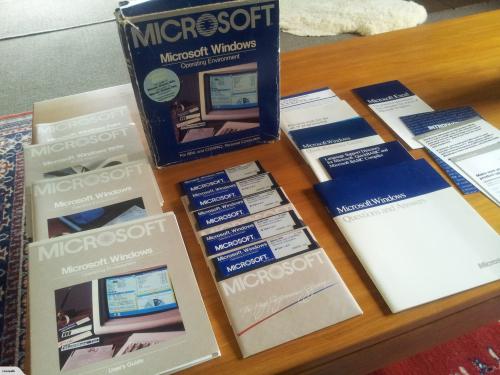 That's just 1.01, so not sure how it relates to this topic
All roads lead to Neptune™

@Battler I don't have FTP access, so can't verify if they are same, however I verified from WinWorld and they are the same.
Top
Post Reply
48 posts